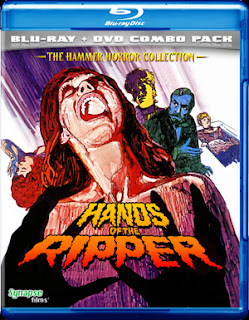 The Film
Anna is a young girl who witnesses her father, who happens to be the nasty British murderer Jack The Ripper, murder her mother. Anna is left orphaned and taken in by a woman who fraudulently claims to be a spiritual medium, using Anna as the voice of the disembodied spirits to fool her customers. After trying to whore out Anna for extra money, the woman is murdered and Anna is taken in by Dr. Pritchard, a doctor of psychology who is heavy into the new theories of Sigmund Freud. Pritchard is dead set on finding out what emotional issues the girl may have.

As the days go by, Pritchard puts Anna into more and more social situations hoping to help her, but it simply leads to more bloodshed as anytime she sees a flash of light and receives a kiss, like she did on the night her mother was murdered, she goes into a trance like state that ends with someone dying. It is up to Pritchard to stop Anna before she attacks his own son and soon to be daughter-in-law. 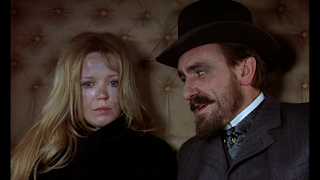 HANDS OF THE RIPPER is a later entry in to the HAMMER catalog of films and manages to defy the trend of slipping quality that had befallen the studio by the 1970s. This film can be viewed as an early slasher archetype than any sort of Gothic horror that made the studio famous decades earlier. It doesn't take long for one to read this plot and immediately come up with a slasher film that sounds very similar. And this film is not only violent, it is bloody too. From hat pins, to broken mirrors and a nasty bit involving a sword (and perhaps a nastier bit with the extraction of said sword) this film has a mean spirit behind it. Jack The Ripper possessing his daughter's mind and causing her to kill... there isn't too much meaner than that.

Director Peter Sasdy may be the most notable name to Hammer fans out of the entire cast and crew, as he worked on several episodes of Hammer House Of Horror and also Countess Dracula (coming soon from Synapse) and Taste The Blood Of Dracula. The cast has a shortage of Hammer regulars but that isn't to say they don't do their jobs with precision and veteran ability. The film's beautiful score by Christopher Gunning plays as a nice contrast to the violence that plays out on screen. HANDS OF THE RIPPER will be sure to please any fan of Hammer and even slasher fans. 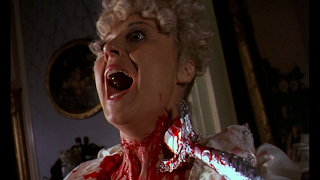 The Video
Synapse Films gives HANDS OF THE RIPPER an anamorphic widescreen 1.66:1 transfer that looks very good for the most part. Skin tone is very natural looking, detail in textures is strong, giving a nice depth to the film. There are a few scattered instances of a soft image in which detail and overall picture quality takes a hit but these moments are infrequent. This transfer doesn't scream HD but it looks very nice and keeps the visual style and setting of the film in mind. This is exactly how a film such as this should look.

Note: Screenshots taken from DVD copy of the film and do not represent the Blu-ray quality.

The Audio
A DTS-HD 2.0 Mono track handles the soundtrack, dialogue and sound effects rather well. The mix is strong and steady, and I'm thankful we aren't forced into a newly created surround track that doesn't do the film any justice. The audio side holds up as well as the video side. English subtitles are available. 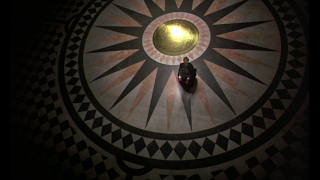 The Extras
The Devil's Bloody Plaything: Possessed By Hands Of The Ripper - A near 30 minute featurette chronicling the history and production of the film. One interesting point is that there are no known records of who played Jack the Ripper in the opening scene of the film, despite the character having dialogue.

Slaughter Of Innocence: The Evolution Of Hammer Gore -  A motion still gallery chronicling some of the nastier moments from the studio.

The Bottom Line
We finally have the next Hammer Blu-ray from Synapse! It has to be closing in on 2 years since the trio of titles was announced and while we're still waiting on Countess Dracula (by year's end!) HANDS OF THE RIPPER was worth the wait for Synapse to get the job done right form the presentation of the film itself to the supplements this is another stellar package from the company.

HANDS OF THE RIPPER is available HERE
Posted by Celluloid Terror (Seth Poulin) at 2:27 PM