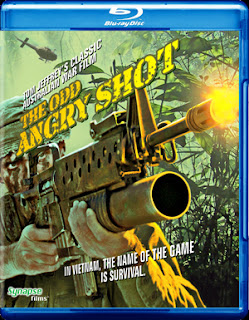 The Film
The war in Vietnam has been well documented in films, with the political and social aspect of the war covered to death. THE ODD ANGRY SHOT is an Australian production, dealing with a troop of soldiers and their time from departing to Vietnam to their return home. The difference here is that instead of focusing on the sociopolitical aspects of the war, or being a straight forward action film this film deals more with the characters and their day to day affairs in the foreign land. Most of the time is spent playing cards for small bets, drinking beer, trying to cure their foot fungus and their encounters with American troops who are all too similar to the boys from the land down under.

THE ODD ANGRY SHOT is a breath of fresh air for the world of war films. The film is far from perfect, and for a war film there is only a couple of actual scenes with fighting, though these scenes do get rather bloody at times. The focus on the characters and their relationships with each other, and the outside world that is passing them by while they're in the jungles, carries the film and remains fully interesting. There is a bit of humor and some somber moments especially when the soldiers come to the realization that it doesn't matter that they're at war and that the people back home simply don't care. This is a war film, but also a human drama that is worth seeking out.

The Video
The only flaw I can find with Synapse Films' presentation of THE ODD ANGRY SHOT on Blu-ray is that there are a series of scratches that pop up sporadically in the middle of the frame. This is no doubt something from the original film elements and couldn't be fixed. They are far from distracting and now I can talk about how great the picture looks... The HD 1.78:1 anamorphic widescreen transfer looks fantastic. There is a small amount of natural grain that compliments the rich detail on skin and textures and the lush jungle landscape where the majority of the movie takes place is gorgeous. Colors are bright and vibrant without ever becoming overbearing or hot.


The Audio
The 2.0 Mono English HD track is also rather good. There isn't a whole lot to push the envelope and give the speakers a workout but dialogue is clear and the soundtrack mix is appropriate. No complaints here.

The Bottom Line
I can't say I'm a giant fan of war films, I have nothing against them I just haven't fallen in love with the genre but THE ODD ANGRY SHOT was a real surprise for me, one that I found to be quite an enjoyable watch. Pile that on top of an excellent package and presentation from Synapse Films and you have yourself a Grade-A Blu-ray.