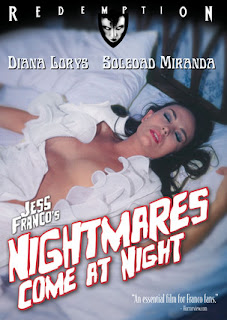 The Film
NIGHTMARES COME AT NIGHT is a slow moving film made up of a couple of stories that seemingly has no point until the very end. It is the first 80 minutes of the film that will make you decide if you're a fan or not. Personally, I'm not. I find it to be a tedious affair, however I have found more of an appreciation for it after listening to the commentary track on this disc. It still remains a bit on the boring side, with the high point being a number of attractive women in the nude for the majority of the film.

Our lead character suffers from delusions of murder (all the while in the nude) and her lesbian lover and doctor friend aren't helping. That's the main plot of the film. There are some artistic touches that stood out a bit more on this viewing than my previous viewing of the film but the film still stands as Jess Franco's lowest budgeted affair and it shows. There aren't many locations, and car interiors are used as a cost saving measure. There are also some scenes that are rather dark thanks to the low budget.

The film isn't all bad and it is an important stepping stone in the evolution of Franco. I may not be a fan of the film but I have a new found appreciation for it.

The Video
Kino Redemption have done a nice job mastering this title to HD. While they typically don't do much on the restoration side of things, this disc is full of speckling of dirt and debris, the picture still has strong detail and rich color for the most part. I find the speckling to not be a hindrance at all and I can certainly see how some people may even enjoy it as a reminder of theater experiences of days passed. Overall a nice job by the label.

The Audio
Available in both its native French or an English dub the audio part of the disc is a nice one as well. There are few things to complain about so I won't. I suggest watching the film in its native tongue as it certainly adds to the actor's performances.

The Extras
Audio commentary with Tim Lucas of Video Watchdog

Jess What Are You Doing Now? - An 8 Minute homage to Franco featuring interviews with his friends and family

The Bottom Line
An important film from an important director gets the HD treatment and the entire package is a great one. Any fan of Euro horror or cult film should experience this film and this disc is the perfect way to do so.