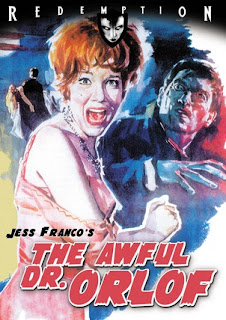 The Film
THE AWFUL DR. ORLOF is Spain's first horror film and takes on a classic of a doctor trying to bring life and beauty back to a loved one. In this case it is Orlof's daughter, and he uses his creepy assistant Morpho and beautiful Arne in his surgical operations. As the women disappear it is up to the somewhat inept police force to discover the true identity of the killer or killers that have been seen roaming the streets.

THE AWFUL DR. ORLOF is a fairly traditional horror film not far from the bloodlines of Eyes Without A Face and bits and pieces of Frankenstein. It is a starkly filmed Gothic horror film with thick atmosphere solid performances throughout. And while this very well may be Franco's most easily accessible film to the average viewer, it is not without some of his signature touches.

Spain's first horror film was a fine way of breaking into the genre with touches of classic horror and a jumping off point for a director that the country would come to shun.

The Video
The beautiful black and white photography is represented beautifully on this transfer from Kino Redemption. The 1.66:1 widescreen presentation taken from a 35mm print has strong black levels and lovely detail on textures and skin. There is some speckling of dirt and dust throughout without ever interfering with the film.

The Audio
Available in both French with English subtitles and an English dub track, the sound portion of the disc is another good one. From the somewhat startling and disorienting opening percussion track to the dialogue between the detectives, the soundtrack is steady and handled perfectly.

The Extras
Tim Lucas' commentary track is again the star of the extras, packed with tidbits of information on the cast and crew, filming locations and various other aspects of the film and Franco.

The Horror Of Orlof - An interview with Jess Franco

The Young Dr. Orlof Chronicles -  A featurette on the making of the film

Jess What Are You Doing Now? - Friends and collaborators pay homage to Jess Franco

The Bottom Line
Kino Redemption have done a fantastic job on this set of Jess Franco Blu-ray releases and there is no reason that THE AWFUL DR. ORLOF shouldn't be in your collection!