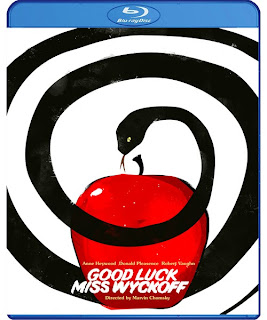 The Film
It doesn't take much reading between the lines to see what this film is all about from the opening visual of "MISS WYCKOFF FUCKS NIGGERS" scrawled across the sidewalk to the final scene between our titular teacher character and her principal where the principal's final line in the film is "Good luck Miss Wyckoff". GOOD LUCK MISS WYCKOFF is a film charged with racism, sexism, and moral questioning.

Set in Kansas in 1954, GOOD LUCK MISS WYCKOFF is the story of a teacher in her mid 30s who is deeply depressed and physically and emotionally ill. Her doctor has diagnosed her with the onset of premature menopause. He and her psychologist passively suggest that she should find a man to be with. A missed opportunity with a married bus driver leads to a disastrous relationship that starts off violently and maliciously with a young black student on a football scholarship, that quickly spirals Miss Wyckoff into a physically and emotionally beaten mess. When the secret of the relationship is brought into the open it quickly spreads around town and Miss Wyckoff's life in the small Kansas town is over as she knows it. 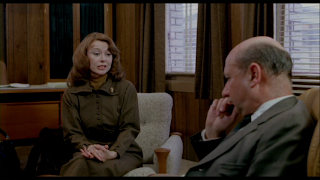 There is little in this film to smile about outside of the truly good nature and intentions of Miss Wyckoff who has a love for education and wants all of her students to succeed. The film challenges the sexism prevalent in the 50s that is still running rampant today along with the racial tensions and boundaries that one wouldn't dare cross in 1954. On top of that is a film about a likable woman struggling to find happiness in a lonely existence where she feels old and ugly. No, GOOD LUCK MISS WYCKOFF isn't a fun film but it is a rewarding experience. 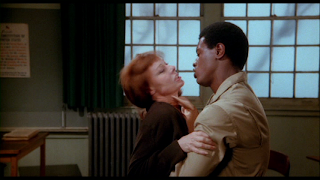 The Audio & Video
Vinegar Syndrome delivers MISS WYCKOFF on Blu-ray/DVD combo pack with a pretty nice transfer. The film itself is a bit dull and murky looking at times and the Blu-ray reflects that. However, when it looks good, which is far more often than not, it looks great. With natural skin tones, and strong detail levels this disc is without a doubt the best the film has looked on home video. The audio has a bit of buzzing in the background but overall also performs very well with just a few hiccups. 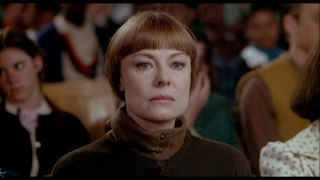 The Bottom Line
Vinegar Syndrome continues to show why they're among the best niche labels currently on the market as their love for film shines through with each release and this 3 disc set is absolute proof of it.