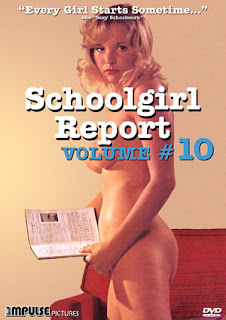 The Film
A classroom discussion about moral legislation leads to five stories in SCHOOLGIRL REPORT #10: EVERY GIRL STARTS SOMETIME. You can guess what the plot of the film is from here... If you guessed girls experiencing their first time having sex you would be correct. However that is just the start of the crazy situations these girls find themselves in. 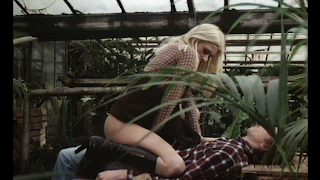 First off is a student failing English class and her teacher offers to tutor her in English and Latin until he is accused of raping the girl, when the truth finally comes out that the girl threw herself at the teacher and decided to have sex with a fellow student when the teacher declined her advances. And then there's the attractive girl in love with her own body and searching for the perfect sexual experience until she finds herself in a 3-on-1 situation which is just too much for her. The third story involves a couple hanging out at a pool when the girl develops a plot to get her stepmother to cheat on her father with her own boyfriend. The girl goes on a bit of a rampage around her boyfriend's apartment when the plan backfires! The fourth story is one of the most ridiculous things I've ever watched... a young couple put on a charade of The Exorcist, with the girl being possessed and the boyfriend being the religious man to save her. The girl screams all sorts of sexually charged things while jumping around flashing everything and making ridiculous faces and throwing food. And finally the film is wrapped up with the story of a girl and her sugar daddy and how it unravels and becomes something better.

SCHOOLGIRL REPORT #10 is more romps from the German series. There is nothing to heavy here, but as the series has been it is entertaining and an easy viewing experience. Bring on #11! 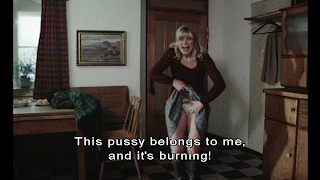 The Video
Impulse Pictures presents SCHOOLGIRL REPORT #10 in a 1.66:1 widescreen ratio in a solid looking transfer. There is a bit of speckling present but nothing distracting. The elements used in this transfer seem to have been in good shape aside from some dirt and dust. This falls right in line with the PQ of previous SGR releases.

The Audio
This German production is presented in its native tongue with optional English subtitles in a 2.0 audio track that is clear and steady. There isn't much present in these films to listen to other than dialogue or sex moans so the track is more than enough to do the job. 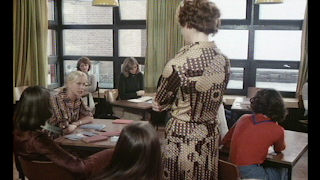 The Bottom Line
If this is your first exposure to the series it is as good a place to start as any. There are no continuing plots or story lines aside from young women shedding their clothes. If you're a previous fan of the series you'll continue to find the same enjoyment you've found 9 times before. Definitely recommended.