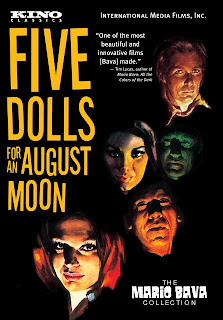 The Film
A group of friends vacation to a modernist futuristic island retreat. One of them is a scientist who has developed a revolutionary chemical process and is fending off offers of $1million each for the formula. As the greed boils and builds members of the group start dying and the surviving members have to play the game of survival to find out who is behind the killings. 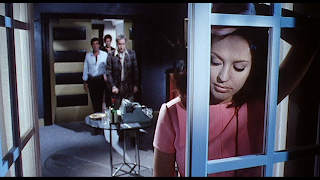 Mario Bava wasn't fond of FIVE DOLLS FOR AN AUGUST MOON, he was hired to shoot the picture and apparently didn't have time to do any rewrites on the script. If that is truly the case then I'd love to see what he could have done given some time because this is a pretty damn good picture as it is. Bava's signature artistic touches and use of lighting and set decoration is truly breathtaking. The design of the house is gorgeous and the film's cinematography is inspired. This film was edited by Mario Bava himself and he shows that he's more than adequate at that job as well. It seems the only job in the filmmaking process that Bava failed to tackle in his career was that of composer or musician.

This film isn't overly violent, there are about half a dozen murders but most of the violence appears off screen. The true draw of the film is to see a somewhat manic version of Bava making a really solid giallo. Oh, and the chance to oggle Edwige Fenech. That is never a bad thing. 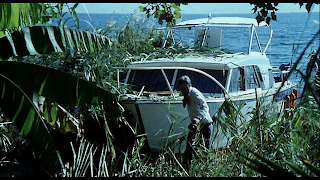 The Audio & Video
Kino gives FIVE DOLLS the royal treatment as far as picture quality goes. From the strong level of detail and texture to the gorgeous colors and skin tones this is an absolutely stunning transfer. Aside from a couple moments where lines intersect the picture this is damn near perfect and natural looking. The audio also fares well with a present but low level of background noise but it isn't distracting. It would be nice if there were an Italian track but the 2.0 English track is just fine. I wish all classic horror films got this type of A/V treatment.

PLEASE NOTE: The screen grabs in this review do not represent the quality of the Blu-ray disc and are for reference of the film itself only.

The Extras
Tim Lucas continues to do great work for these Kino releases and who better for a commentary track than the author of the definitive Mario Bava book: Mario Bava: All The Colors Of The Dark. The track is engaging, informative and full of love from Lucas. Otherwise the disc features a handful of Mario Bava trailers for other Kino releases. 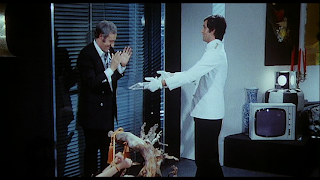 The Bottom Line
Mario Bava is one of the finest filmmaker's the world has ever known and the quality of this disc stands right up there with the man's legacy. This is exactly how Bava should be seen on home video.