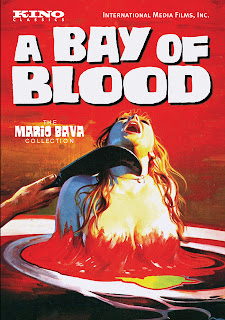 The Film
There are three films that generally get the credit for starting the slasher film craze of the 1980s. These films are Psycho (1960), Black Christmas (1974) and Halloween (1978). While Psycho may very well be the first slasher, it is typically Black Christmas that is referred to as the first modern slasher film and Halloween that gets the credit for blowing the door wide open for the violent, body count films. In 1971 Mario Bava's A BAY OF BLOOD was released and it is every bit as much a slasher film of the 1980s that Black Christmas is. It is a bit of an injustice to not include A BAY OF BLOOD in the discussion of the archetype of the slasher film. Hell, a murder sequence from Bava's film was lifted almost shot for shot in the original Friday The 13th.

This isn't the best Bava film, but it does have some great moments, and is full blown nasty horror. I'd rand this among the 2nd tier Mario Bava films and that is nothing to sneeze at as the man has made multiple masterpieces. Slasher film fans will of course find a lot to enjoy with the blood and gore factor being ramped up considerably from earlier films from the acclaimed Italian director. And the twist ending is sure to leave you stunned.

The Audio & Video
From an A/V standpoint A BAY OF BLOOD is a top tier release from Kino. The picture features strong detail and nice color timing along with natural skin tones and deep black levels. The audio side of things is a clean and stable English track with very minimal background noise. Another great job by Kino on their Mario Bava Collection.

The Extras
-Audio commentary with Tim Lucas, author of "Mario Bava: All The Colors Of The Dark"
-Alternate Italian cut of the film with Italian audio track
-Theatrical Trailer
-Additional Mario Bava trailers
The Bottom Line
If you're a Mario Bava fan or a slasher fan you'll want to add this disc to your collection as it is a significant upgrade to previous disc releases.

A BAY OF BLOOD is available HERE
Posted by Celluloid Terror (Seth Poulin) at 1:52 PM