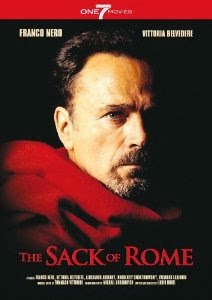 The Film
Franco Nero stars as Gabriele da Poppi, a 16th century Roman painter who lives with a pair of questionably young assistants. Gabriele is informed by a friend that the Germans have arrived in Rome and are ransacking the place and he would be wise to get out while he can. Gabriele is a bit delusional and high on himself calling himself more sacred than the pope and that nobody would touch him because of his art. Of course he is wrong and he and his assistants fall victim to the raping and pillaging that has fallen upon the city. His beautiful young assistant and model Gesuina is raped and he is forced to begin working on a giant portrait of the mercenary who has taken over his home. 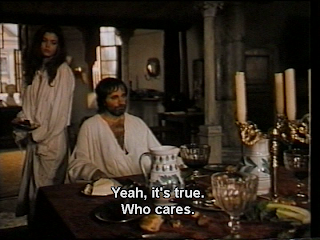 THE SACK OF ROME, originally known as GOLD is a really odd picture for me. For something I was not at all familiar with I was half expecting this to be pretty bad, or at least just going through the motions. I don't know why. I was pleasantly surprised though, that Nero is pretty much on point in the lead role, his model/lover Vittoria Belvedere is gorgeous and graces us with her naked body and the violence and sleaze factor of the whole thing really ups the entertainment level.

The original title GOLD is one that references why the mercenaries are in Rome to begin with, there's a giant horde of gold and they want it. THE SACK OF ROME, which to the best of my knowledge is a newly created title for this DVD, isn't great, it relies on cheap entertainment but it is entertaining nevertheless. It is cool to have this obscurity on disc. 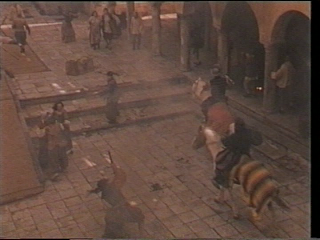 The Audio & Video
THE SACK OF ROME is delivered on DVD courtesy of One 7 Movies in so-so condition. The 1.33:1 full frame presentation seems to be cropped from a wider original presentation and seems to be sourced from a VHS copy of the film. Video quality is soft and dull with several video that are likely due to the source material. While it is far from a great transfer it is certainly watchable. The audio side of the disc is decent with the film's original Italian mono track in place with optional English subtitles. There's nothing amazing about this audio track but there's nothing to complain about without nitpicking.

The Extras
The lone extra on the disc is a still gallery. 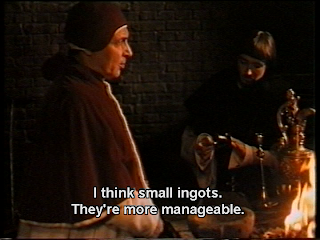 The Bottom Line
This sort of oddball historical drama could have been better and could have been presented better but I can't hold that back from recommending it. It is a curiosity that I've never heard talked about starring Franco Nero and featuring quite a bit of sleaze and violence. Yeah, that is enough to at least rescue it from the depths of film hell and give it a serviceable release on DVD and it is enough that you should give it a watch.

THE SACK OF ROME is available HERE
Posted by Celluloid Terror (Seth Poulin) at 9:46 PM