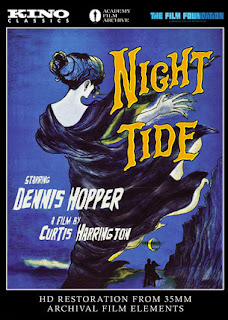 The Film
Johnny Drake is a US Navy sailor on shore leave played by a baby faced Dennis Hopper, the innocent and slightly naive young man wanders around the boardwalk attractions of Venice Beach until he meets a young woman named Mora in a bar. Their encounter is brief but Johnny invites himself to walk Mora home. Mora invites Johnny over for breakfast the next morning where the pair hit it off and begin to see each other a bit more often. Mora shows Johnny where she works as a sideshow attraction at the boardwalk as a mermaid who only charges 25 cents admission to get a glimpse of a siren of the sea.

As Johnny and Mora get closer the people surrounding the pair begin to warn Johnny that his relationship with Mora may be putting him in danger. Johnny learns that she has had several boyfriends turn up dead recently and a fortune teller informs Johnny that his future is clouded with danger. Paranoia begins to set in with Johnny that perhaps Mora is an actual mermaid, or dangerous siren. Johnny's relationship with Mora quickly takes a turn for the worst during a Scuba diving adventure where violence and paranoia reach a boiling point.

NIGHT TIDE was directed by Curtis Harrington and features some beautiful images throughout. There is a great image of Hopper jumping up on a high railing and doing a balance act on it after he walks Mora home the night they met that is beautiful. The film is a slow burn, featuring more drama than horror but it allows the hints and clues to build paranoia, not only within our star but the audience as well. The strongest point of NIGHT TIDE is Harrington's direction and the photography. It is a rather simple but nice looking film. It is interesting to see such a young Dennis Hopper long before he was Mad Dog Morgan or shouting about Pabst Blue Ribbon in what might be his first starring role.

NIGHT TIDE is a solid film, a bit short on the thrills but is reminiscent of other early 60s films like Carnival Of Souls and would make a pretty neat double feature with that film. While not overly horrific, NIGHT TIDE is worth seeking out and will hopefully begin getting some more notoriety that it certainly deserves.

The Audio & Video
NIGHT TIDE makes its debut on Blu-ray from Kino Lorber and it looks gorgeous. The 1.66:1 widescreen transfer in full 1080p HD is sharp and clean, with just a bit of white speckling throughout. Detail levels are strong with the texture of fabrics and on some of the carnival attractions being exceptional. Black levels are deep and there are no signs of any DNR or edge enhancement. This is a great example of how older films can look great on Blu-ray. The 2.0 mono track is crisp and clear with no background noise. It is a simple track but sometimes that is all that needs to be done as it is pretty much a perfect audio track for the film.

The Extras
-Audio commentary featuring director Curtis Harrington and Dennis Hopper - this track is several years old, having been recorded before both men passed away. They recount their time filming and some production details. Harrington recalls most of the details with Hopper chiming in just enough.
-Two part interview with Curtis Harrington clocking in at 55 minutes
-Original theatrical trailer

The Bottom Line
It is great to get films like NIGHT TIDE out on Blu-ray and even better when the release has great A/V quality and some cool features. If you're a fan of older offbeat horror films then I would suggest you check out this disc.