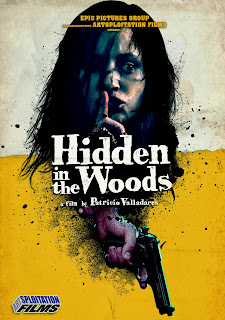 The Film
Ana and Anny live in the countryside of Chile, held captive by their disgustingly abusive father. The man has not qualms about beating them, tying them up and raping them. Eventually his sexual abuse leads to an inbred baby, who is deformed. Named Manuel, this baby is kept in a shed and fed a diet of only raw meat. For years the trio of kids puts up with this, living in fear of their father who works as a drug holder for a kingpin, until a pair of cops show up to find out about the father which ends in a bloody mess and the now grown children fleeing into the woods.

Ana, Anny and Manuel take solace miles away in an old cabin their father owned resorting to prostitution for money for food. Eventually the kingpin's henchmen hunt them down looking for the drugs which results in another violent encounter until the girls find the kingpin, and their father and years of torture and abuse come to a head. 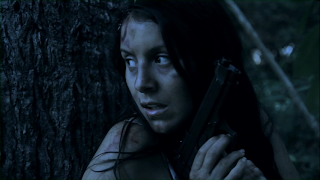 If you took this film and traveled back to the mid-1970s and screened it at a seedy 42nd Street theater in Manhattan it would not be out of place. HIDDEN IN THE WOODS is very much a piece of modern exploitation without any of the cuteness that many of the Neo-Grindhouse movement films of the last several years have. This film pushes the limits of taste, and it becomes and a test of endurance with how much you can stomach.

That isn't to say HIDDEN IN THE WOODS is all style and no substance. Not at all. Director Patricio Valladares makes sure that while our lead females endure seemingly endless hardships and live in a world of pure shit, these girls are far from punching bags and pin cushions for our perverse enjoyment. Ana, Anny, and Manuel are the only character who gain our sympathy in the entire film. Every other character is either entirely despicable or, in the case of the police, too much of a fuck up to be worth it.

HIDDEN IN THE WOODS will divide audiences (and has done just that at various film festivals) and it will certainly be talked about because of its violence and willingness to take everything to the extreme. It would be a shame if that is all it is remembered for, however. While the film isn't perfect, there are a couple hamfisted attempts at comedy, and some of the supporting performances could have been better, it is an extremely beautiful  example of loyalty, strength and love set inside an awesomely violent and nasty exploitation film. 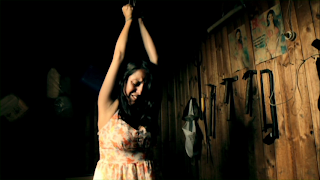 The Audio & Video
Artsploitation Films delivers HIDDEN IN THE WOODS on DVD with a great looking 1.78:1 anamorphic widescreen transfer. Not surprisingly the film looks great as it wasn't shot more than a couple of years ago but the transfer really lets the different tones in the color come to life. This disc looks as beautiful and the film is ugly. The audio tracks, either a 5.1 surround or 2.0 stereo track both in Spanish with English subtitles, sound great and full of life. The almost endless screaming and many gunshots come through with booming force. The quality of this disc stands up with the biggest and best releasing companies out there. 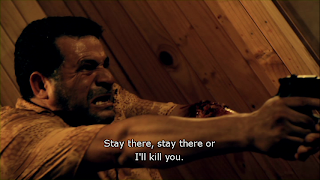 The Bottom Line
HIDDEN IN THE WOODS caught me totally off guard with how much of a throwback it is without being at all tongue-in-cheek. It is a nasty piece of exploitation and horror that rivals the most vile films of the 1970s. I highly recommend this to anyone that appreciates what a film as nasty as this has to offer.

HIDDEN IN THE WOODS is available HERE
Posted by Celluloid Terror (Seth Poulin) at 8:02 PM

Wow sounds like it's right up my alley, will have to check this out. Really been enjoying old exploitation films lately