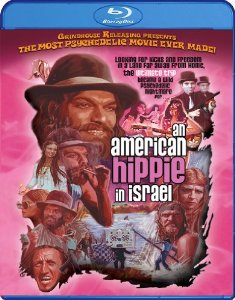 The Film
Mike is a hippie from America seeking a peaceful world of solitude, love and simplicity outside the violence and hate found within the constraints of society. Quickly upon arriving in Israel he meets a beautiful young redhead while hitchhiking and they return to her parent's house for a quickie. It is the time of love after all. They head to town where they meet other like minded hippies, young people feeling lost in the world, and they join up for a marathon of singalongs, weed smoking, wine drinking and love making. Mike lets his plan be known for the group to find a place where they can be at peace with the world and live their life free of modern day ugliness. The group is in love with Mike and his idea and the celebration continues until a pair of machine gun wielding mimes crash the party and kill everybody except for Mike, his girlfriend and another pair of hippies. This is far from Mike's first encounter with these mimes who have seemingly been following him all over the planet but this is the first time they've been deadly. 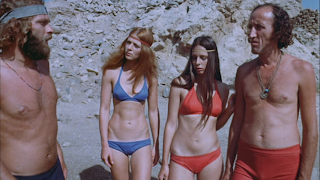 The group is down to four, but they still carry on with their mission of finding peace, perhaps now stronger than before. After adopting a pet goat from a market, and what seems like endless driving looking for their oasis they see an island a few miles off the coast that would be perfect. After a short boat ride they've reached their paradise and proceed to have a wonderful night of lovemaking. All is well until one morning their boat has vanished, likely swept away by the high tide and they realize that the water is heavily infested by sharks so swimming back to shore to their car to get to town for another boat or any supplies is virtually impossible. The quick shift from carefree youths to savage beasts is jarring. It quickly becomes a two-sided war, with the line literally drawn in the sand.

When I first heard the premise for AN AMERICAN HIPPIE IN ISRAEL I thought I was in for a weird for the sake of being weird movie that you show your friends as a simple oddity to the world of film. Something that you'd preface a viewing with "you won't believe this shit" or something along those lines, something I've said many times before enjoying a film. No, that is not this film. Not entirely anyways. When I heard of hippies, and mimes with guns, savagery and sex I didn't think I'd get the poignant commentary that is offered up here by director Amos Sefer (in what IMDB has listed as his only credit). While this can be viewed quite easily and enjoyably on the surface for being a form of so bad its good, and out there as all hell, it offers up something a bit more than that if you're willing to look a bit deeper. The mimes could be an obvious stand-in for society as a whole bringing down much of the group of hippies but in a bloodless manner as to say to the viewer that they've brought them back into the corporate, capitalist world we live in. And the not so subtle sacrificial lamb. And there's more. 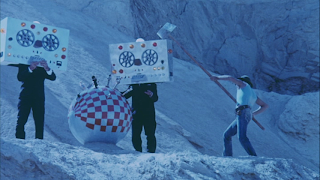 AN AMERICAN HIPPIE IN ISRAEL is an immensely entertaining piece of 1970s film that will likely never be re-created again. This was a film of its time and place and came together with a young group making a fun film that has spirit and somehow despite all of its shortcomings, merit. I could go on much further about this film, and perhaps one day I will but as this is a review for the Blu-ray Disc I won't spoil anymore.

The Audio & Video
Grindhouse Releasing is new to the Blu-ray game with this release but they don't show rookie mistakes. Their first Blu-ray is a fan-fucking-tastic presentation. AAHII has a gorgeous film-like look with natural grain in tact. Vibrant colors, including reds that pop just enough and deep blacks combined with strong detail level and skin tones that you want to reach out and touch make this a top notch looking release. The audio fares well also with an English track that has been kept in good condition with a clean sound and little to no distracting noises this is an all around fantastic AV job. 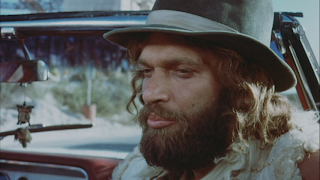 The Extras
An absolutely stacked release with features that include:

The Bottom Line
Grindhouse Releasing enters the Blu-ray game with all guns blazing. Their first home video release in a few years is a grand slam that would surely make the late Sage Stallone proud. This limited edition 3 disc set of just 2000 pieces is sure to go quickly so I urge you to not only add this great package to your collection but support a superior label in the process because we all want to see more Blu-rays from their catalog.

AN AMERICAN HIPPIE IN ISRAEL is available HERE 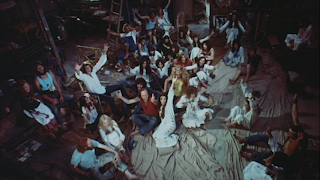