A Virgin Among The Living Dead (Blu-ray Review) - Kino Redemption 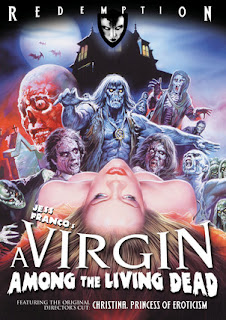 The Film
Christina is a beautiful young woman travels from her boarding school in London, the only home she's ever known, to a remote family mansion in the hills of France to be with her family after receiving and invitation. Having never truly knowing any family she thinks this will be a great opportunity to get to know her bloodline. Upon her arrival she discovers a truly odd group who seems all to desensitized to death. On top of this she has disturbing nightmares and witnesses some incredibly bizarre things inside the house such as women performing a bit of bloodletting and licking, a bit of incestuous behavior, and folks from the surrounding area repeatedly telling her that the house is empty.

It all gets worse when Christina starts seeing her deceased father with a noose around his neck and he tells her of the evil things going on in the family. Oh and did I mention there are zombies?

A VIRGIN AMONG THE LIVING DEAD is an oddly mesmerizing piece of Euro trash. And I do mean that in the best way possible. Originally titled CHRISTINA, PRINCESS OF EROTICISM, VIRGIN came to be when Jess Franco's film had several minutes of added zombie footage thrown in. This footage was directed by none other than Jean Rollin.

Rollin's footage is strange in that it feels forced into the film all the while you never question why it is there, even when it doesn't really make a damn bit of sense. It isn't bad footage, it has a nice dreadful atmosphere where Christina (who has been replaced by a girl who covers her face the entire time as to not show the bait-and-switch that has occurred) can't escape the living dead. The zombies have a nice simple design to them and the setting for that sequence is again simple but effective. It only makes up about 11 minutes in difference but Rollin's added footage turns Franco's entry into bizarre family land, heavy on atmosphere and a disturbing take on eroticism and twists whatever meanings we were to take out of Franco's film and turn it into a sleazy horror romp. I enjoy both cuts of this film and think it is best left to each viewer to decide for themselves which they prefer.

The Video
Kino Redemption brings Jess Franco's surreal vision to life beautifully with rich colors and strong textures. The anamorphic widescreen print has the scratches and speckling common with these releases but it never reaches a level of distraction and there is no room for complaints with how great the film looks.

The Audio
Dialogue and Bruno Nicolai's score come through nicely on a track that is stable and clear with only a few moments of pops or crackling. Nicolai is known for being one of Europe's best film composers and this is part of the reason why.

The Extras
Audio commentary with Tim Lucas - Another insightful track from a true authority on Franco and his films.

Mysterious Dreams - An 11 minute interview with Jess Franco filmed shortly before his death in which he remembers the history and making of the film.

The Three Faces Of Christina - A featurette on the various versions of the film.

Jess! What Are You Doing Now? - A repeat feature found across this collection of Franco discs. It is an 8 minute homage to the director.

Photo gallery
The Bottom Line
With two cuts of the film, a top notch presentation and a stack of extras this is nothing short of a must own and a contender to be on some "best of" lists at the end of the year.

A VIRGIN AMONG THE LIVING DEAD is available HERE
Posted by Celluloid Terror (Seth Poulin) at 6:58 PM