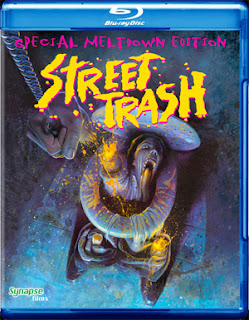 The Film
The 80s were a wonderful time in film. Sure they weren't perfect, and many films relied too heavily on excess instead of quality film making during the decade many of these films were a load of shitty fun. STREET TRASH was to be director James Muro's film school thesis and while it was denied at being a thesis it became a cult classic. A very messy, dirty and colorful cult classic.

An auto wrecking yard is home to a group of derelicts who live in the towers of tires out back. The movie is little more than the story of these bums and their encounters with the law, each other, and a case of Tenafly Viper, a decades old case of wine that a local liquor store owner has set out for a dollar a bottle. At that price even our dirty friends can afford it. The only problem is that when you drink it you get really sick... and melt into a pile of day-glo colored slop. You also have to watch out for your penis being ripped off and tossed around. 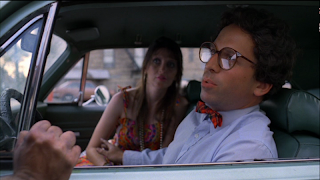 This isn't high art folks. The plot of the film is thin and just sturdy enough to hold together our scenes of violence, gore and comedy, and there is plenty of each. The melted neon mess will have you smiling until the next joked comes about and cracks you up (the grocery store scene remains one of the single funniest things I've ever seen in a movie). If you like gross out horror comedies you'll love STREET TRASH.

The Video
I have to put it bluntly- Synapse Films' transfer for STREET TRASH on Blu-ray is simply a revelation. For a low budget, student made horror, gross out comedy splatter fest, made in the early 80s this disc is breathtaking. The DVD released several years ago by Synapse was a fine release itself, one I didn't think could be topped for this particular film, but I was wrong. If you've never seen the film, the bright neon colors of the melting bums explodes off the screen without ever being "too hot". Flesh tones look nice and natural, and there is no sign of any DNR or edge enhancement. This is pretty much a perfect transfer for this particular movie.

Note: Images do not represent Blu-ray Disc quality and are for reference to the film only. 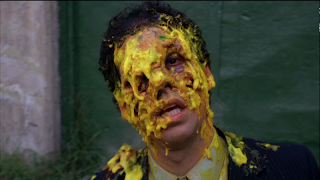 The Audio
The sound side of things may not blow you away but with two options, a 5.1 surround DTS-HD mix and the original 2.0 mono mix in DTS-HD. I prefer the original 2.0 mix myself as I've found many soundtracks that are remixed for surround sound that didn't originally have that many channels to sound awkward and not true to their production. The 2.0 track is totally enjoyable and just how I've always remembered loving this movie. 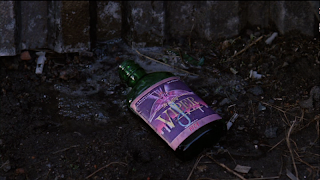 Can we say "stacked"?

I picked up the DVD along with a really cheap copy of Slime City a couple of years ago. Needless to say I was much more impressed with Street Trash.

I just might have to invest in the Blu-Ray now...

It is worth the investment