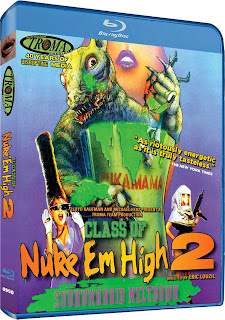 The Film
The CLASS OF NUKE 'EM HIGH trilogy reaches it's pinnacle with SUBHUMANOID MELTDOWN, where the students of Tromaville have graduated to college and now have to deal with more nuclear waste problems including the Subhumanoid, emotionless beings created to make life easier and better for the rest of us. Unfortunately as the title suggests, these creatures tend to meltdown! One man is determined to keep his loving subhumanoid alive even when he has to battle Tromie the giant nuclear squirrel... WHAT?

This trilogy is some of my favorite Troma work. The series continues in the present day with the Return to Nuke 'Em High films as the first has been released and was excellent and the follow up should be getting its release shortly. These uber cheesy, raunchy and downright gooey and messy films are a freaking blast to watch but they maintain a certain level of social awareness that really makes them something special.

You should know what you're in for with this film (and the rest of the series), spotty acting, intentionally over the top action and comedy and a rather offensive script. This series is fantastic from the effects and ridiculous stories to the awesome soundtracks.

The Audio & Video
Troma seems to be hit or miss with their Blu-rays lately but CLASS OF NUKE 'EM HIGH 2 is about as good as it gets. The 1080p HD anamorphic widescreen transfer simply shines. Surfaces and textures show exceptionally high detail levels while skin tones look healthy and fleshy with no sign of waxiness or excessive DNR. Colors are vivid and have a natural realism to them without looking artificially pumped up. The English audio track has a nice crispness to it. The levels are mixed very well so that dialogue and the soundtrack compliment each other without competing for the foreground. The track is high quality and free of any distortions, background noise or other damage.

The Bottom Line
A gorgeous presentation of one of the best Troma movies that has some really cool special features. Go ahead and treat yo'self! Seriously, this release is Grade-A