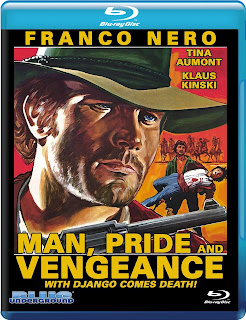 The Film
Don Jose (Franco Nero) is a Spanish soldier who becomes enamored with a gypsy woman named Carmen (Tina Aumont) after she asks for help in getting factory work. Jose quickly becomes obsessed with Carmen and when he finds out that one of his superior officers had an affair with her he gets into a fight with him, accidentally killing him. Jose runs off with the woman and her crew of bands including her husband (Klaus Kinski). Jose agrees to help rob a stagecoach to prove his love to Carmen and will do anything else he deems necessary to win her away from her mysterious life.

Commonly referred to and marketed as a spaghetti western MAN, PRIDE AND VENGEANCE is not a proper western. This film is a period drama but does have some strong western influences and scenes you'd find in a western. These scenes are very well done but it's important to note that they aren't thrown in for the purpose of being able to market this as a western, they're fully in line with the story and definitely advance the narrative in a natural and meaningful way.

The story is instantly engaging as Franco Nero gives on of his best performances of the era as the hopeless lover who has fallen hard for the mysterious, smokey eyed Carmen. Tina Aumont is captivating as Carmen and you wouldn't know this was the first time she was really required to carry the female lead role. She's excellent in her performance and almost mesmerizing visually. Kinski again shows his talents here despite being as unlikeable as ever. He truly was one of the greats.

Luigi Bazzoni and his camera crew including cinematographer Camillo Bazzoni and Vittorio Storaro, who would later become an Oscar winning cinematographer in his own right, created beautiful scenes and images throughout the desert setting. The twilight fist fight scene has such a great look to it and the scope of the shot during the explosion is massive.

In the special features, Franco Nero states that he, Storaro and the Bazzoni brothers were longtime friends and made short films together while working towards their bigger breaks, always intending to make a feature together. MAN, PRIDE AND VENGEANCE is that feature film and the passion of four very talented friends coming together to make a movie they always wanted to make definitely shines through as this film shows the three different areas of the friends' talents to mesh together beautifully.

The Audio & Video
Blue Underground brings MAN, PRIDE AND VENGEANCE to Blu-ray with a stunning 2.35:1 anamorphic widescreen transfer that has a lovely and natural grain structure giving the film a very filmic look. Colors are warm and vivid without being overly hot or popping too much. Detail level is high in both skin tones which are fleshy with no sign of waxiness and in surfaces/textures. I didn't notice any damage to the print at all.

The disc comes with a pair of audio options, English and Italian. Both tracks are DTS-HD mono tracks and optional English, French and Spanish subtitles are available for the Italian audio track. I chose to listen to the English option as it was the one that played on the disc when I hit play. The track sounds very nice with exceptional clarity in dialogue and a surprisingly robust sounding score given the mono mix. Score and dialogue levels are in appropriate relation to one another and there's no distracting popping, crackling or other annoying damage.

The Bottom Line
You'd think the folks at Blue Underground were part of that tight knit group of friends because the of love and respect they've shown this release is immediately evident. I shouldn't be surprised though, this is just another fine example of a label that truly cares about the product they release and always do so with the highest quality.