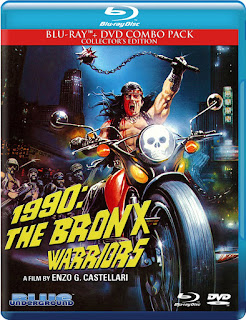 The Film
The years is 1990 and the Bronx has been delcared a lost cause, no man's land. The only inhabitants are various gangs that fight for territory over the borough. When the daughter of a corrupt mega power in Manhattan runs away and joins Trash and his gang The Riders he sends in a mercenary and killing squads to retrieve his daughter and wage war on the gangs that have joined forces to fight back against their oppressors.

1990: THE BRONX WARRIORS is a glorious piece of trashy action in the vein of Escape From New York and The Warriors but ramps up the violence ten fold and stands toe to toe with those classic films in terms of memorable characters. Mark Gregory's Trash, Fred Williamson's The Ogre and George Eastman's Golem are all quite colorful and classic. Vic Morrow is perfectly maniacal in the role of Hammer, the main mercenary.

Acting can be a bit hammy from time to time but it doesn't detract from the film at all in my opinion. This is a world built in the decaying slums that the rest of America has written off and the acting being a bit rough around the edges just adds to that world. What isn't rough around the edges is Castellari's direction, the man is an action film master. From fight fights and shootouts to flamethrower massacres 1990: THE BRONX WARRIORS rollerskates (quite literally) around its clubhouses, subterranean hideouts and dramatic costumes with flair and elegance while remaining gritty and wild.

It's funny to me that a film such as this one may be viewed as a ripoff of certain other classic films that are certainly deserving of their status as classics but I would prefer to back to the "ripoff" time and time again. I have probably seen 1990: THE BRONX WARRIORS more than a half dozen times and I keep coming back for more because it is a movie steeped in coolness. The sets, the actual Bronx locations, the characters, the score, they're all wrapped up into this little package with a ribbon tied around them by Enzo Castellari's direction that pulls it together into a brilliant package of trashy action.

The Audio & Video
Blue Underground is going to serve 25 to life because they killed it. This Blu-ray looks and sounds as good as looks and sound can look and sound. The 2.35:1 anamorphic widescreen transfer is pretty much pristine. A gorgeously sharp picture quality is the base for vivid colors, a natural grain structure free of DNR or edge enhancement and fleshy, healthy skin tones. The English audio (optional English, French and Spanish subtitles) is handled with a DTS-HD Master Audio mono track that takes the original audio recording and makes it sound as beautifully crisp and clear as posisble. There's no damage or background noise so this is purely the prime example of how this film should sound.

The Extras
-Audio commentary by director/co-writer Enzo G. Castellari
-Enzo G. Castellari and Fabrizio De Angelis In Conversation Part 1 of 3 - a 14 minute conversation between the director and producer who have a lively and extremely entertaining and informative talk remembering their time spent making movies together including on 1990: THE BRONX WARRIORS
-"Sourcing The Weaponry" - Enzo G. Castellari visits the Italian Weapons Rental House of Paolo Ricci - 12 minutes of Castellari and Ricci acting like two kids in a toy store sharing stories of making movies together and playing with all of the prop knives and guns.
-"Adventures In The Bronx" - Interview with actor/stuntman Massimo Vanni
-Theatrical trailers
-Poster and stills gallery
-DVD copy of the film

The Bottom Line
I love movies like this and this one is damn near the top of the mountain. When I heard Blue Underground was putting this one out on Blu-ray my excitement climbed with each passing day until I was able finally to view the disc and there was not a single moment of disappointment. From the technical side of the disc, to the great selection of special features this is not only essential viewing, it is a must buy.