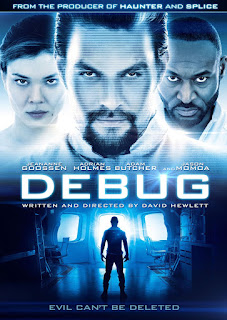 The Film
Six inmates incarcerated for various hacker related crimes are sent to an unmanned spaceship to debug corrupt and rogue programs to make the ship usable once again. While aboard they find an artificial intelligence inside the ship's computer system that is dangerous and uses the hackers own lives and desires against them in violent ways.

DEBUG is an ambitious venture for a low budget film and while I fully support trying to make your film as big and as good as it can be, sometimes you have to know your limitations and make them work for you. DEBUG suffers from weak CGI that looks like it came out of a mid-90s science fiction film that the plot of the film isn't too far from as well. DEBUG feels dated in almost every way and would fit in quite nicely on a video store shelf alongside other cyber horror movies that were popular fare when the internet was first getting hugely popular. 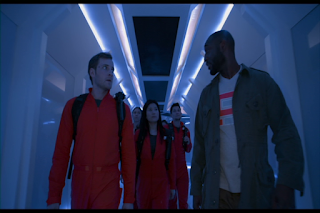 The acting is hit or miss from character to character and the personification of the evil that lurks on the ship is far from menacing. DEBUG's main issue however is simply what I've already stated. It was dated long before it was even made. It's competently made and even features some nicely designed interiors on board the ship but clunky effects and acting that is uneven don't help this one.

The Audio & Video
Ketchup Entertainment's anamorphic widescreen transfer features a sharpness and vividness to both details and overall picture quality. Colors are strong and robust while the English audio is handled through a 5.1 Dolby track which sounds good as well. The dialogue is clear and free of any distracting damage such as crackling or popping. 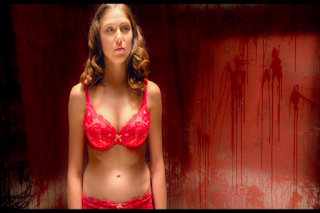 The Extras
A 19 minute behind-the-scenes featurette is included. 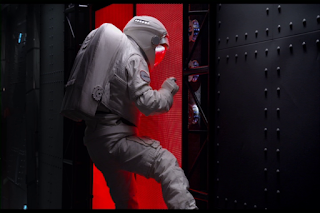 The Bottom Line
DEBUG isn't terrible but both looks and feels like a movie totally out of its era. Recommended only if you're huge into cyber or computer based horror.