The Film
It's summer vacation in a secluded college town and a small beach is being terrorized by a couple of sleazy old mechanics who are snatching up the remaining coeds to give to a group of aliens who need the youthful blood for transfusions to remain alive in this wacky Sci-fi slasher mixup that is purely a product of the 1980s.

Film producer Mardi Rustam (Psychic Killer) makes his directorial debut with EVILS OF THE NIGHT deciding that the film wasn't in need of great technical prowess and decided to handle the duties himself. Rustam was able to put a film together. Was it good? Was it cohesive? Does it make sense? Well, not really. Three strikes and you're out, right? Well again, not really. At least not here. EVILS OF THE NIGHT is pure schlock. It's a mashup of B-movie alien invasion science fiction complete with cheap costumes that we know are extraterrestrial because they are silver and shiny. (What else would aliens wear?) Then there's the slasher, hicksploitation type angle that the sleazy town mechanics played by Aldo Ray and Neville Brand give the movie as they kidnap the teens in exchange for gold coins, which happen to obviously be quarters. (I said it was low budget.) 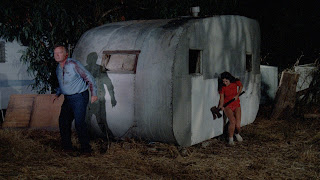 The selling point to this movie in foreign markets were the names that were lured into this shoot such as John Carradine, who was well into his years of signing on to any role he could get regardless or quality and Julie Newmar whose glory days as Catwoman from the Batman TV series were long gone and now both of these names are aliens in need of blood transfusions. The selling point in America? The T&A. This movie is loaded with gratuitous nudity and sex. Public sex? Ok! Tits everywhere? You betcha'! Asking girls you don't know if panties you found in the woods belong to them? Well, yeah! The girls aren't ugly, either. This is an attractive 1980s cast that probably hoped to get a big break after baring it all in EVILS OF THE NIGHT. Ha, yeah, that didn't happen. (Looking at you G.T. Taylor!)

But they did get to be in an absolute classic piece of schlock. How this movie isn't talked about among the best cult classics of the 80s is beyond me. Not only is it wacky, cheap and filled with past their prime stars and gratuitous nudity, it also has a few memorable gory moments with lots of blood and limbs being lopped off. And no review of EVILS OF THE NIGHT would be complete without mentioning that porn star Amber Lynn also co-stars in it. If that doesn't sum up the greatness that this films holds I'm not sure what does. 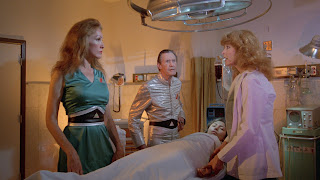 The Audio & Video
Vinegar Syndrome killin' it again! This low budget ($190,000) production looks gorgeous in HD thanks for VinSyn's brand new 2K scan and restoration from the original 35mm negative. The transfer maintains the film's original 1.85:1 aspect ratio and features stellar detail in surfaces and textures and incredibly healthy flesh-like skin tones. The close-ups on the two henchmen reveal gorgeously interesting wrinkles and age. There's a natural film like grain structure to the entire film along with striking colors and deep black levels. The English DTS-HD Master Audio features a mono  mix that sounds pristine. There's damage or distortions to the sound and the mix and mastering job is excellent as the dialogue is never lost among the score or soundtrack. Levels are steady throughout. 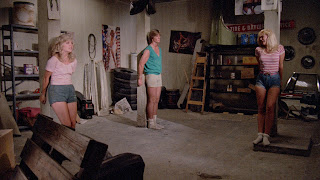 The Extras
A nice slate of extras including a hefty one has been put together for the Blu-ray debut of EVILS OF THE NIGHT and they include-
-"Alien Blood Transfusion" - 9 minute video interview with director Mardi Rustam
-Alternate Feature Length TV edit of the film
-Isolated Score by Robert O. Ragland
-Outtakes (nearly 25 minutes)
-TV Spot
-Work In Progress Theatrical Trailer 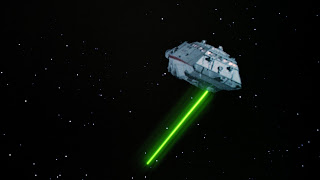 The Bottom Line
EVILS OF THE NIGHT is the lowest common denominator of 80s filmmaking. It's rude, crude, sleazy, bloody and dumb and the sum of its parts plus the killer technical job by Vinegar Syndrome equal the greatest common denominators of schlocky entertainment.

EVIL OF THE NIGHT is available HERE
Posted by Celluloid Terror (Seth Poulin) at 10:52 AM