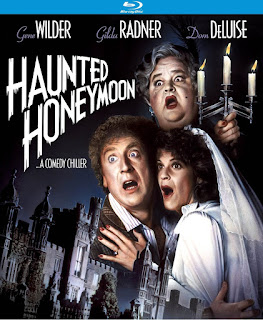 The Film
Gene Wilder stars as Larry, a beloved radio show actor who is quite preoccupied with irrational fears. He is to be married to his co-star Vickie (Gilda Radner) on a vacation trip to his aunt Kate's (Dom DeLuise) old mansion where his family has plans to cure him of his fears by scaring him... death! That promise may be taken a bit too seriously by jealous family members when Aunt Kate names Larry the sole heir to her estate. Oh and did I mention that one of the family members might be a werewolf?

HAUNTED HONEYMOON is a horror themed comedy romp with an amazing cast. Gene Wilder is one of a kind and I'm glad to have been able to enjoy this film that he not only stars in but also co-wrote and directed so soon after his passing, for the first time. Wilder is endlessly likable and genuinely funny without needing a schtick to fall back on. His real life marriage with Gilda Radner translates seamlessly to the screen and they're absolutely adorable together. They have perfect chemistry and are a perfect duo to lead the film.

The film's mix of spoofing gothic horror tropes and murder mystery ala Clue lends itself to be silly and goofy fun. It only takes one look at Dom DeLuise in drag as Aunt Kate to start the chuckling, before heartier belly laughs come about. DeLuise is excellent, as he always was, giving a warm performance as the matriarch of the family who is trying to help her beloved nephew and the love of his life have a perfect wedding all in the midst of a police investigation into a murder and a werewolf running around creating all sorts of havoc. Paul L. Smith gives a booming performance as Larry's doctor and uncle and is one of several others in the supporting cast that hold their own with the stars of the picture. There really isn't a bad performance in the bunch.

The film has excellent set design with a mansion you'd find straight out of a Hammer production from two decades earlier, and a really well done wolf man creature design that would rival any straight forward horror production of the era. HAUNTED HONEYMOON succeeds by keeping things lighthearted and cute with enough kooky comedy thrown in to keep things feeling like they're moving even more briskly than they are. If there's such a thing as a gothic murder mystery romantic comedy than HAUNTED HONEYMOON is probably the tops of the genre which makes it quite surprising to me that the film was panned by critics and was a poor performer at the box office. Hell, even Dom DeLuise earned a Razzie award for his portrayal of Aunt Kate. I'd think that HAUNTED HONEYMOON would have been at least a moderate success on name power alone. Hopefully the film has found it's audience or this Blu-ray will help spread the gospel of HAUNTED HONEYMOON because while this film isn't perfect it really is a delight to watch.

The Audio & Video
Kino Lorber gives HAUNTED HONEYMOON its high definition debut with an attractive 1.85:1 anamorphic widescreen transfer that is very clean and clear allowing for finer details to come through. Colors are strong and natural, despite a very dreary color palette through most of the film's production in the old gothic style mansion. Appropriately, the black levels fare well with no compression or blocking issues. The DTS-HD English audio is free of distortions, dropouts or other imperfections. The mix is well done, and steady throughout.

The Bottom Line
HAUNTED HONEYMOON is a perfect choice for lighter and more family friendly viewing for the Halloween season and would make for a wonderful viewing for the memories of the stars of this film that have since passed away.

HAUNTED HONEYMOON is available HERE
Posted by Celluloid Terror (Seth Poulin) at 11:54 AM