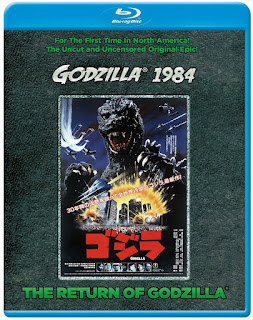 The Film
By 1984 the Godzilla franchise had mostly dried up. It had been 9 years since the last entry into the series, Terror Of Mechagodzilla, had been released to underwhelming fanfare in theaters. It would be one of only two films in the franchise to sell less than one million tickets in Japan. The franchise was put on hold. Stories and scripts came in but none were put in to production. The giant monster movie would return with THE RETURN OF GODZILLA (aka GODZILLA 1984) as the world dealt with the Cold War and the threat of nuclear warfare starting at the push of a button. Oddly enough, the theme that created Godzilla would be the one that resurrected him three decades later.

Godzilla is awakened when an Earthquake hits the Island he's been slumbering in. A local fishing ship has been wrecked and the majority of the crew has been found in a mummified state with only one crew member surviving the bloodsucking attack of a mutant sea louse. It's found that the sea louse has mutated in an exponentially larger size than the centimeter it should be because it was feeding off the radiated blood of Godzilla. Shortly after a Russian submarine carrying nuclear weapons is attacked and they blame the Americans until satellite imaging shows that it was truly Godzilla who attacked to feed off of the nuclear energy. The Russians and Americans demand Japan use nuclear bombs to destroy Godzilla before he potentially attacks their shores. Japan strongly opposes the use of such weapons knowing the effects that they've had for decades on their land and people after World War II. The leaders of Japan come up with a plan to poison Godzilla with Cadmium and lead him to his death in a volcano.

The political commentary that was such an important part of the original Godzilla film is once again on display here and is an equally important part in resurrecting the franchise. The mid 1980s were a boiling point for tensions with the Soviet Union and it provided basis for some very memorable movies of the time. THE RETURN OF GODZILLA uses the political turmoil and its own history to create a film that is not only entertaining and exciting but at times especially tense. Godzilla is a giant monster stomping around cities of Japan but the main antagonist of this film is the nuclear bombs that would cause massive casualties and loss of life along with the radioactive fallout that would cause medical issues for years to come. Godzilla is a sympathetic character and appropriately so. It's ironic that the USA and Soviet Union team up to try and bully their weapons use on to Japan in the film as the US was anything but friendly and willing to be on the same side as the Soviet Union in 1984 but as long as they can protect their own shores from the threat of Godzilla it doesn't matter if they destroy Japan with nukes again. It creates an interesting dynamic for the real world situations that were among the biggest issues facing the entire world.

THE RETURN OF GODZILLA returns to the roots of the series, leaving G-man to carry the film as the lone monster. There's no giant fights with other Kaiju, and to the people of Japan in the movie Godzilla is once again a threat and not a lovable hero, despite being sympathetic on a deeper level. The fact that there's only one monster leads to the film feeling a bit slower than you may be used to with the majority of the film's in the franchise but it works in giving plenty of time to develop a meaningful story with important character relationships and interactions.

There have been 29 Japanese Godzilla films from Toho to date, this being the 16th and it certainly falls among the top half of the franchise. Admittedly I'm a big fanboy of Godzilla so I probably enjoy the lesser entry of the series more than most people do but I think that speaks to the quality of THE RETURN OF GODZILLA. I'm not sure I'd rank it among my top 10 but it doesn't fall far outside of it.

The Audio & Video
Kraken Releasing brings THE RETURN OF GODZILLA to the states for the first time and in HD no less with a respectable looking 16x9 anamorphic widescreen transfer that features a clean picture free of damage and debris. The colors are faithful to all versions of the film I've seen but look sharper than ever. Black levels are deep and detail is fairly strong. Close-ups of Godzilla deliver the highest level of detail in his rough, scaly skin. Sure there's room for improvement in the picture quality, it could be sharper and feature better detail but the picture is very clean and is a rock solid HD presentation of the film. 5.1 DTS-HD Master Audio tracks in both English and the native Japanese with optional English subtitles round out the listening options. I opted for the original Japanese language track which sounds excellent. The sound quality is crisp and crystal clear with no distortions or instances of popping or background noise. The mix is very well done between levels of dialogue and score. The subtitles are translated well and easy to read with perfect timing. The subtitles are yellow, which is a minor nitpick of mine, except when dialogue from characters overlaps and the 2nd character's dialogue is subbed in white. While I understand the benefit of separating colors for different characters it was a bit distracting having different colored subtitles popping up. Another minor nitpick which I wouldn't let affect the score I give this release.

The Extras
The lone extra is an original theatrical preview promoting the upcoming release. Similar to a trailer but more of an extended commercial. It was a lot of fun to watch this throwback of movie advertising.

The Bottom Line
It's been a long time coming for fans of the big guy to get the original Japanese version of the 1984 film and now we have a rock solid Blu-ray release thanks to Kraken Releasing. It's among the better Godzilla films so I'm calling it essential viewing.

THE RETURN OF GODZILLA is available HERE
Posted by Celluloid Terror (Seth Poulin) at 10:49 PM