Los Angeles, CA (September 2016) For immediate release. Synopsis: In her quest for fame, drama student Stella gets caught in the grip of a mysterious and deadly stage school. Stella longs to be an actress. When she is accepted to a private school in Berlin, her dream seems to come true. But there is something wrong with the “Matteusz Gdula-Institute”. In the seventies, the school´s founder, Matteusz Gdula, practiced a learning style that promised to let students shine by driving them to their mental limits. In the end his method was banned, as mysterious deaths occurred during his lessons and Gdula committed suicide. At night, Stella hears eerie sounds in the corridors of the school. A fellow student disappears. Stella suspects that behind the closed door to the abandoned, forbidden wing of the school lurks a bloody secret.  A secret that kills the students...
The first 3000 numbered BD/DVD combos include bonus CD with Original Soundtrack, Collectible Blu-ray/DVD Slipcase and Sleeve, AND A 24 Page Booklet. For the Die Hards the first pressing of No. 1 -1000 includes as well a Collector’s Card. 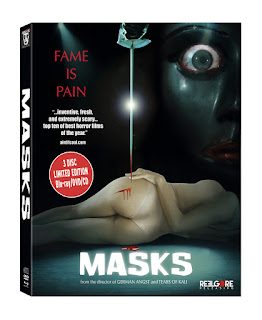 Posted by Celluloid Terror (Seth Poulin) at 8:16 AM