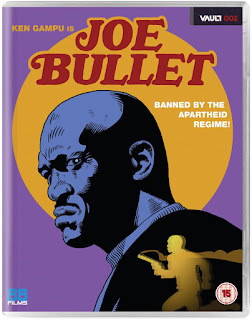 The Film
I recently met a man named Joe Bullet. Oh, you don't know Joe Bullet? Well, let me introduce you to him.

In 1973 an action packed exploitation film with an all African cast was released in South Africa and banned by the government after only a couple screenings. The movie was called JOE BULLET and starred Ken Gampu in the titular role as a well dressed ass kicker who mixes James Bond and Shaft and is tasked with tracking down the people responsible for attacks on a local soccer club who have found themselves in the championship game against the perennial favorite. Murder, backstabbing and some gratuitous soccer action make up this slice of film history that was made and subsequently banned in the heart of Apartheid era South Africa.

As a film JOE BULLET is spotty. There's plenty of fun action scenes to keep things entertaining but there's also some stretches where things get a bit boring before ramping up again. The writing features a standard plot that doesn't reinvent the wheel but it works just fine for this type of movie while the acting is also spotty. Some of these actors had little to no experience and the entire cast spoke English which wasn't always a language they were very comfortable with so it leads to some shaky dialogue. It's okay, I'm not particularly worried about award winning performances here, moreso with Ken Gampu kicking ass in outfits that usually make me break out in sweats because they're just too heavy for a sunny South African day. I get plenty of that, Gampu really does a great job being the believable hero that can take down entire corrupt organizations. Gampu's main foe is Rocky (Joe Lopez), a back stabbing man full of himself and looking to get rich. Rocky's look is one that will forever be burned into my memory like many of the best viallains are. His face glistening with sweat (this could be said for anyone in the production at any given time), his devious smile showing his missing teeth and his single froth tooth that hangs down far passed the point it should. Pair his look with his diabolical laughing and he's an exploitation villain not to be soon forgotten.

JOE BULLET is raw, very rough around the edges and far from polished. I love it for these reasons and find its imperfections to be a wonderful look into not letting anything stand in your way, including the bullshit laws of Apartheid. JOE BULLET was quickly confiscated and tucked away for decades because it saw a black man handling a fire arm and driving a sports car. The film itself is not political and doesn't have a political message behind it but that doesn't stop it from having a powerful and important legacy that will only grow as more and more people become aware and lay their eyes on it. Imperfect as it may be it has a definite charm that draws the audience in and is filled with interesting locations and exciting action. Joe Bullet is a bad man and JOE BULLET is something I highly recommend you seek out now that you finally have the chance.

The Audio & Video
Before I go into the details on my opinion on how the disc looks and sounds I want to say that I think the most important part of this release is that it exists and the film has been preserved by 88 Films.

The film has been restored from two surviving 16mm prints in its original 1.33:1 aspect ratio with varying results. The transfer is rough at times with damage and scratches throughout but other times when the image is cleaner is looks pretty decent. Colors fluctuate from strong with a lush look to a a bit faded and washed out. That's the nature of this transfer throughout - hit and miss but never so bad that it becomes unwatchable. I'm very satisfied with how it looks when all things are considered and will happily revisit it time and time again.

The 2.0 stereo audio mix is more consistent than the video with a clean presentation for the majority of the film. It isn't a particularly strong or dynamic mix by nature so don't expect it to give your audio system any sort of work out but you won't have any issues with fluctuating volume or instances where you can't decipher dialogue.

The Extras
An audio commentary track with writer/producer Tonie van der Merwe, Benjamin Cowley of Gravel Road Films and Callum Waddel. The key to this track is having Tonie van der Merwe on the panel who offers direct insight into the production and history of the film from someone that was as hands on as you could be with it. Cowley and Waddel also bring great information to the table as well from a more historical context. The track is well paced and a pleasant listen.

A trailer rounds out the special features.

The Bottom Line
This is why physical media matters. Movies like JOE BULLET are the reason we need to keep physical media alive. There's thousands of lost, abandoned and forgotten films out there that deserve releases and to be seen and I don't think most studios care enough even to dump them on to a streaming service. Support the labels you love and there will be more releases like JOE BULLET.