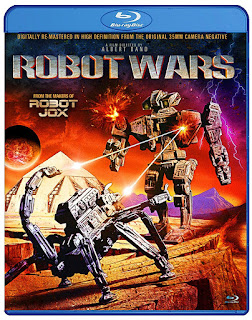 The Film
In a dystopian future America is split into two blocs with opposing views and they're both the target of a band of pirates. Though peace between the blocs has reigned and the mega robots once used for war are now mere tourist attractions and public transportation and the once heroic pilots are now little more than chauffeurs, a diplomat has secret plans to wage war with the robots and take control of the world. It's up to Barbara Crampton who co-stars as a journalist to uncover the secret plans and warn everyone in time for Drake (Don Michael Paul) to prove he's still the tough pilot he claims to be.

ROBOT WARS was the first Full Moon release of 1993 and may have got lost a bit in the shuffle of a strong year for the studio because I don't hear it talked about too often in Full Moon discussions and that's a shame because it really is an entertaining film. Albert Band directs this stop motion sci-fi romp that stars Don Michael Paul and Barbara Crampton. It is Crampton, who should be no stranger to Full Moon fans as she appeared in Trancers 2 and would go on to star in Castle Freak, among others, that carries the film and really brings a veteran prowess to the screen. It is also her character that really advances the movie along. Albert Band rarely gives us anything especially stylish from a directorial standpoint but he does competently capture the action and give us a good view of the world they've created and interesting set pieces.

But for all of the comments we can make on acting and set design what we really care about is the robot action. After all, this movie is called ROBOT WARS and the artwork promises a giant humanoid robot fighting a giant scorpion robot with lasers and explosions. Well at only 72 minutes ROBOT WARS is a quick one and though one of my main gripes with the film is that most of the time we see the robots they are relegated to taxicab status as they transport tourists around, they did manage to fit in a few really great stop motion animation fight sequences and those are obviously the best parts of the film. David Allen made a name for himself doing special effects work from the 70s through his death in 1999 and collaborated with Charles Band for the first time on 1978's Laserblast but some of his best stop motion sequences can be found right here in ROBOT WARS. The fight scenes are very well done and the robots themselves look great. How awesome are the scorpion and mastodon bots? Bad. Ass. I would have loved for this movie to give us another 15 minutes of robot fighting but budgetary constraints made that impossible. I understand the disappointment some viewers may have that there isn't more robot action, I'm right there with ya but what we get is fantastic and the rest of the movie serves up some good laughs so it's not like it's a waiting game to get to the good stuff.

The Audio & Video
Full Moon restores yet another of their video store era classics with a new full HD anamorphic widescreen transfer which gives way to a very nice looking picture and certainly the best you've seen it look in your living room. There is some speckling and very minor dirt/debris but the picture is very sharp. Detail is high in all aspects but especially in closeups of faces and set dressing which at times does reveal it to be a bit cheap in its construction - A lovable detail for sure. Colors are vibrant and skin tones are natural and fleshy with no signs of waxiness from excessive DNR. The Blu-ray is presented with 5.1 digital surround sound and it sounds very nice. The mix is solid and steady with no volume fluctuation and the score and dialogue are mixed nicely. There's no background noise or distortions to speak of.

The Extras
-The Wizard Of Wars: Remembering David Allen - 11 minute featurette with Charles Band in honor of special effects artist David Allen who did the stop motion animation on ROBOT WARS.
-Vintage 1997 Full Moon Promo
-Original Videozone featurette - A half hour behind the scenes feature straight from the VHS days of Full moon

The Bottom Line
ROBOT WARS is the exact type of movie to bring you back to your childhood of roaming the video store shelves and picking out a movie based solely on its cover. ROBOT WARS delivers exactly what's on the cover. And just take a look at that cover.

ROBOT WARS is available HERE
Posted by Celluloid Terror (Seth Poulin) at 2:06 AM

Oh wow, I forgot his dad worked on this one. I have been meaning to revisit this tile but now I will wait until I pick up the Blu.