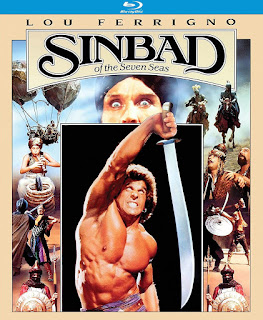 The Film
A young prince recruits the aid of Sinbad and his shipmates which include a viking, and a samurai are recruited by Prince Ali to rescue the princess who has been kidnapped by the evil Jaffar in order to marry her. Jaffar also has magic gems that help generate his powers and has them spread across the land guarded by various evil creatures. After escaping Jaffar's torture chamber Sinbad and his crew set sail to gain control of the magic gems and strip Jaffar of his evil powers.

SINBAD OF THE SEVEN SEAS is as a bed time story being narrated by Daria Nicolodi who has constant voice overs describing the action we see on screen. It's clunky and even if the story would be  a bit bumpy and choppy without it, it's unnecessary. Luckily it doesn't matter because this is a whimsical romp into fantasyland. Lou Ferrigno has stated that this movies was one of his favorite movies to make and it shows every second he's on screen. You can tell he's having a blast as the legendary sailor and he's perfect for the role. Ferrigno is ripped, jacked and cut. He looks the part and while he's not going to win any awards for his acting abilities he's the perfect mound of muscle to cheer on as he fights demons, rock monsters and all of the other perils and pitfalls he encounters along the way. His sidekicks add a bit of fun as well with some sword play and martial arts action to mix things up a bit but Ferrigno really is the main course as Sinbad.

Enzo Castellari is known for successfully making films in whatever genre was trendy at the moment in Italy. Whether it be war and actioners or spaghetti westerns and even gialli, Castellari was able to craft really great, or at least very entertaining pictures in whatever genre gave him work. SINBAD OF THE SEVEN SEAS is more along the lines of the latter. It would be easy to rip this thing apart as much of the acting is stilted or totally overblown, the writing jumps from scene to scene with little flow and it claims to be based on Edgar Allan Poe's "The Thousand And Second Tale Of Scheherazade" without resembling that story at all except maybe for a balloon scene. SINBAD OF THE SEVEN SEAS simply asks for you to not expect too much except for fun. Castellari nailed the most integral thing in making this movie a success and that's sheer entertainment value. The action and fantasy in this movie are silly but pure at heart. I dare you to watch Sinbad pick up a demon creature and swing him around over his head knocking out several other demon creatures and not smile ear to ear. It is delightful and it's that childhood feeling I get while watching it that makes the bedtime story narrative angle passable even if it gets intrusive at times. SINBAD OF THE SEVEN SEAS is like gathering a few friends in the park or playground and each picking a different character to pretend to be and you battle for supremacy of the rope bridge and the twisty slide except it was done on sound stages and you weren't jacked like Lou Ferrigno when you were 7 years old playing on the jungle gym.

The Audio & Video
Kino Lorber brings SINBAD OF THE SEVEN SEAS to Blu-ray for the first time with an anamorphic widescreen transfer that looks good though the master is obviously a bit older which leaves room for improvement. The film has a wide array of colors in its palette and they're bright and vivid and are my favorite aspect of the picture quality of this disc. Detail levels are adequate but even at their best during tight shots and close ups they still lack that really fine detail. Skin tones look healthy and natural and the clarity is pretty good with just a bit of speckling and light imperfections that are par for the course with many Kino titles. I'm not in love with the transfer but I am satisfied with it.

The audio quality features an English dub track in a 2.0 DTS-HD Master Audio mix that sounds good. The dub track is typical for Italian productions of the period and make for a strong presence in the mix that is always front and center. The score comes through nicely though with the levels mixed well. The tracks is crisp and clear with little in the way of imperfections or background noise.

The Extras
A theatrical trailer makes up the entirety of the special features.

The Bottom Line
It doesn't take more than a glance at who directed this film and who stars in it to realize it's probably going to be an exercise in campy fantasy storytelling and it is, but in all the right ways. For all of its flaws SINBAD OF THE SEVEN SEAS is a light hearted adventure flick full of laughs and thrills and I'm a fan.

SINBAD OF THE SEVEN SEAS is available HERE
Posted by Celluloid Terror (Seth Poulin) at 5:44 PM