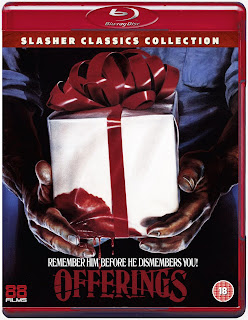 The Film
OFFERINGS is a movie that features one of those covers that jumped out from video store shelves and whether you rented it over and over or never did you certainly remember that image of the killer holding a package dripping with blood. It certainly made my imagination run wild with ideas of what the movie would be like for years until finally seeing it and finding out that OFFERINGS, like many other later 80s slasher films was a mishmash of slasher tropes and took plenty of ideas from better films.

John is a mute boy being raised by his crude mother who may or may not have murdered his father. She's verbally and emotionally abusive and doesn't care much at all for her son stooping to disgusting acts like ashing her cigarette into his scrambled eggs. This all plays a role into his damaged mind which drives him to harm animals. John's only friend in the world is Gretchen who tries to protect him from bullies but even she can't stop them from daring John to walk around the edge of a well where he eventually falls in. John eventually finds himself locked in a mental ward after authorities found him chewing on the remains of his mother he had just murdered. After ten years of confinement John snaps and escapes the hospital confines and head's for his hometown to take revenge on the boys that tormented him that day at the well.

The slasher well was damn near dry by the time OFFERINGS came about with the glory days in the rear view mirror. The studios were still churning out the body count films and so were independent producers. Shot in Oklahoma by first time writer/director Christopher Reynolds, OFFERINGS definitely shows its home grown roots. The 16mm photography is a bit grainier than the 35mm photography of studio productions and effects are crude. This does lend a bit of attitude and rawness to the film that I think it needed because it wasn't going to get by on a story that borrows more plot points from John Carpenter's Halloween than Reynold's Lawyers (assuming he had any) should have been comfortable with. Reynolds was not the the director that Carpenter is but he still competently put together a decent little movie that gets by scene to scene. OFFERINGS manages to stay entertaining despite being relatively goreless with many kills occurring off screen. The best kill which involves a head in a vice clamp is still effective using only the shadows cast on the wall for impact. This scene was well executed despite the budgetary constraints that undoubtedly prevented Reynolds from creating a prosthetic head.

The rest of the golden moments from the film rely more on the charm and quirkiness of the film rather than particularly skilled or inventive filmmaking. The dog food scene may be the best in the entire film and gave me a good, deep belly laugh. It was a welcomed intentional laugh from a movie that plays itself almost deadpan serious throughout despite having some silly moments. The pizza party scene is also a fun gross out moment that should get a nice squirm and squeal from the audience who are viewing the film for the first time while veterans of the movie can smile on slyly because they know that ain't sausage.

OFFERINGS is a last gasp in the slasher genre, a breath that the genre couldn't draw deep enough from to revive itself but one that had some heart behind it even if it was just trying to copy what the bigger, deeper breaths that came before it did.

The Audio & Video
88 Films has created a new 2K restoration from the original 16mm negative and it looks solid overall. The 16mm photography limits just how sharp the picture can be but I think the transfer brings out quite a bit of detail that you certainly didn't see in the film's VHS releases where it gained a bit of video store infamy. Colors are vibrant and natural while skin tones are healthy and fleshy and black levels are deep with no compression or pixelation issues.

The Extras
Aside from a trailer for the film the lone special feature is an audio commentary track from The Hysteria Continues, a group of slasher lovers who have a popular podcast series on the genre. The track is lively but ultimately hit or miss in terms of content as most of the useful insight and information comes from one of them with the rest chiming in various opinions. They do seem genuinely excited to discuss the film which is nice but the free form conversation format isn't the best way to handle an audio commentary when the commentary team wasn't involved in making the film.

The Bottom Line
Slasher fans will finally have a chance to get their hands on OFFERINGS and it's presented quite nicely. This is how you'll want to see the film without a doubt.