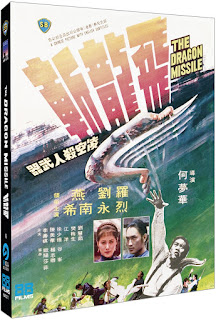 The Film
The nasty Lord Chin has tasked his longtime loyal guard Szema Chun to make the cross country trek obtain a rare medicine and return in time to cure him of the deadly skin cancer, or as described in the film's native language an evil boil called "One Hundred Birds Worshipping The Phoenix" - a much more colorful description -  afflicting him. Worried that Chun will turn his back on him Lord Chin has also hired a small gang to ride with him and kill him as soon as he obtains the medicine to return it themselves. When the crisscrossing becomes known to each other the chase begins and head's fly.

The plot may be thin in THE DRAGON MISSILE but the action is thick and production values are high. Martial arts movies with a decapitation theme were all the rage at this point with the titular Dragon Missile being a pair of boomerang blades that lop heads clean off (in a mostly bloodless fashion oddly enough) and the film itself rivaling the Flying Guillotine films and its various knockoffs. Many of these films have a bloodier outcome than the Dragon Missiles do, though there are a few select moments of the signature bright red Shaw Bros bloodshed.

While it may not have the blood factor THE DRAGON MISSILE certainly has the higher quality production than many similar movies that were coming out from companies other than Shaw Bros. There was no real competition for Shaw Bros studios when it came to production value of martial arts films and this film proves it. The sets are, many of which are interiors that shows off their deep pockets as many other similar productions would stick to exteriors as much as possible to save on lighting, set design and other associated costs and in THE DRAGON MISSILE they're lavishly decorated giving way to some exquisitely designed fight scenes. Imagine having a Kung-Fu fight in penthouse suite of the Four Seasons but in old China. The costumes are also brilliant and have that iconic Kung-fu look to them. There's nothing cheap about this production and the cast and crew certainly hold up their end of the bargain as well.

Director Meng Hua Ho (The Flying Guillotine, The Mighty Peking Man) will be a recognizable name to any seasoned martial arts film fan as he directed some very notable films for Shaw Bros during the 1970s with his career having began with extensive work in the 1960s and running all the way through the early 90s. His work here is showy and stylish as the best martial arts films are. He beautifully captures the brilliant fight choreography and the editing keeps it smooth and flowing without feeling cut up and jumpy. The ensemble cast is a veritable who's who of Shaw Bros and Hong Kong cinema with just about every face popping being one you've seen before and will undoubtedly see again with just about everyone in the cast seemingly having 100 or more screen credits. Lieh Lo is no hero but he's a very capable lead and someone we still end up cheering for because he's so badass and has such cool weapons. He shares some memorable scenes with Tony Liu my favorite of which being the ring fight scene. The cast is made of character actor after character actor and each one brings their own personality to the table so things are always fresh and that ensures that THE DRAGON MISSILE is always entertaining and fun despite being little more than an 80 minute chase scene.

Martial arts films have given us some of the most memorable fight scenes, weapon designs, and thrills in all of cinema and the Dragon Missile might be some of the coolest weapons I've seen yet. The film will probably never be considered a true classic of the genre but I do think it is an exciting adventure movie and damn did I have a lot of fun watching it.

The Audio & Video
The film has been restored from an HD master in the film's original 2.35:1 Scope aspect ratio by 88 Films and boy does it look nice. The production features a wide array of colors from the lush greens to bright blues and reds and they all look vibrant and beautiful. The colors pop just enough without burning too hot and black levels are deep and free of any compression issues. The detail level gives the silk costumes and stunning interiors extra life and depth as it allows us to see the quality in each and every piece. The film is presented in its native Chinese with a LPCM uncompressed audio track or with the English dub and English subtitles. I chose to watch the film with the English dub and it sounded crisp, clear and absolutely pleasing to the ear. There was no distortions or damage to speak of.

The Extras
-Audio Commentary with Hong Kong cinema expert David West - This track features Mr. West giving a well paced and scripted commentary filled with historical facts and tidbits on the production of the film and its place in the Shaw Bros library along with extensive notes on the filmography and biography of just about every cast member that graces the screen as more than an extra. This is basically an audio encyclopedia on the film and is a really pleasing listen that even gives us some humorous moments.

-Audio Commentary with Asian cinema expert Bey Logan - Well if I didn't think the David West track could be topped I was wrong. Bey Logan is energetic and has facts and anecdotes firing fast and furious and gives a more in depth view of the production and locations. He covers some similar information as David West did on his track but I think he even adds more.

The Bottom Line
There's nobody I wouldn't recommend 88 Films' Blu-ray release of THE DRAGON MISSILE to. It's an action packed piece of martial arts goodness and for anyone that might say something crazy like "I don't like martial arts movies" well they're just plain wrong.

Thank you so much Love your blog.. buy dvd when calls the heart season 4