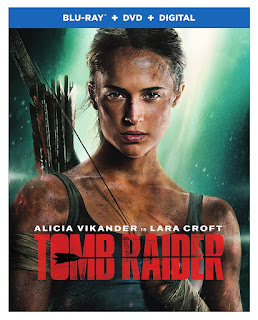 The Film
Lara Croft is the daughter of an archaeologist adventurer who went missing seven years ago and has been presumed dead. Refusing to accept his death Lara has not accepted her inheritance including his estate or companies despite barely making ends meet as a bike courier. Lara discovers a final puzzle left for her by her father and decides to leave her world behind and follow in her father's footsteps to a dangerous mythical island near Japan to find out what happened to her father.

TOMB RAIDER is based off of a successful video game franchise that debuted in 1996 and was adapted for the silver screen in 2001 with Lara Croft: Tomb Raider and a sequel two years later both of which performed well at the box office but haven't aged particularly well in part because of dated special effects and a less than stellar performance from their star Angelina Jolie along with flat stories. This new entry into the series reboots it with a new lead (Alicia Vikander) and frankly it caught me off guard. I wasn't aware that it was being released until the advertising campaign started but I immediately thought it looked like a fun summer blockbuster in spite of its early March theatrical release. I 'm pleased to say that Roar Uthaug's TOMB RAIDER is pretty much just that- a fun summer movie. 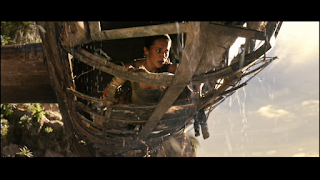 It starts with Alicia Vikander who has become a household name in the last few years for roles in films such as Ex Machina and The Danish Girl which she won an Oscar for. While she won't be winning an Oscar for her performance in TOMB RAIDER she proves her versatility and that she can more than handle a physically demanding role such as this. Vikander is fit and beautiful but she doesn't rely on that to get her through the movie. While she could be bumbling around the jungle and arcane crypts and still look good doing it she handles the perils and pitfalls that any good adventure movie is plagued with. I make mention of this because fanboys of the Tomb Raider series have long sexualized the Lara Croft character and I wanted to make sure to point out that Alicia Vikander is not just a pretty face. Walter Goggins plays a rather vanilla villain in charge of an army of nameless workers and henchman trying to find the same tomb as Lara and her father before her. Goggins' character may not be the most original or exciting but he is good in the role and manages to be properly unlikeable. It is Dominic West in the role of Lara's father that may be the misstep in casting as I found him to be silly and inappropriately comedic at times that reminded me of Brendan Fraser's character in The Mummy franchise (which worked in those films but feels wildly out of place here). 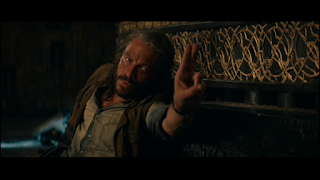 Roar Uthaug's direction is competent without being overly flashy or relying on tired and annoying shortcuts like overly shaky camera work. He brings the screenplay to life with enough flair that I'm surprised the film didn't perform better in American box offices but this adventure of archeology and family takes more than a few pages from the Indiana Jones book and gives us the Cliff's Notes version of them. It's during the trials to enter the tomb and find the fabled queen who's crypt they are trying to reach where there's a bit of borrowing from Indiana Jones And The Last Crusade. I'm okay with that but it does lack the emotional punch that Last Crusade has and I feel that we never quite get the payoff we (or the film itself) deserves. I was really hoping for something epic and possibly not of this world to happen inside that crypt but the climax never hits that fever pitch where the film hits a real rolling boil of excitement. I feel that would have brought TOMB RAIDER from a good movie to something great.

The Audio & Video
Warner Brothers brings TOMB RAIDER to home video with an expectedly gorgeous Blu-ray release. The anamorphic widescreen transfer looks stunning with a lush and vivid color palette that really takes off once we arrive on the Island. Otherwise detail level is quite strong, skin tones are naturally healthy with no signs of excessive DNR and there's no issues with compression or blocking even in the darkest scenes. The audio on the disc is presented with a few different options including Dolby TrueHD 7.1 and DTS-HD Master Audio 5.1 surround tracks that are booming. The mix across the channels is steady and the levels are appropriately mixed. There are scenes that will definitely give your system a bit of a workout and could leave pictures rattling on the walls. Audio quality is crisp and very clear with no hiss or distortions even at its craziest. French, Spanish and Portuguese audio options and subtitles are also available. 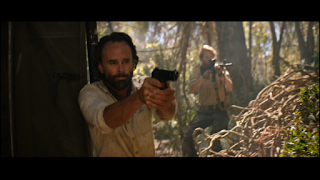 The Extras
Four featurettes make up the special features section of the disc and they include:

-"Lara Croft: Evolution Of An Icon" - This featurette takes a look at the Lara Croft character from her original video game origins to the most recent film adaptation
-"Croft Training" - A look at the workouts and training Alicia Vikander did to prepare for her role as Lara Croft
-"Tomb Raider Uncovered"- A cast and crew look at bringing the video game to life on the big screen
-"Breaking Down The Rapids"- A look at the one of the film's most exciting and memorable action scenes. 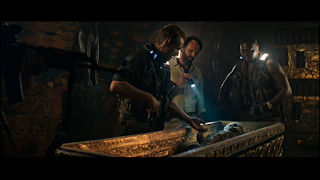 The Bottom Line
TOMB RAIDER is what I hoped it would be- An updated take on a dated adventure film with a far more capable lead. This is a perfectly enjoyable summertime popcorn flick in the tradition of Indiana Jones.

Oh my goodness! a tremendous article dude. Thanks Nonetheless I'm experiencing subject with ur rss . Don’t know why Unable to subscribe to it. Is there anybody getting an identical rss drawback? Anyone who is aware of kindly respond. Thnkx online gambling

Would you be desirous about exchanging links? free online casino slots