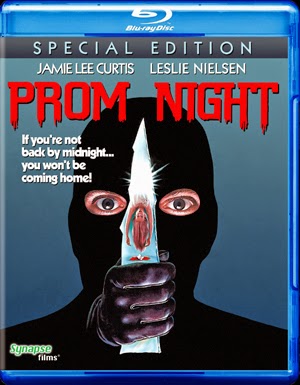 The Film
Six years after an accident involving some kids playing a prank leaves one of their friends dead from a nasty fall, a killer is on the loose at Hamilton High at prom. The students are preparing their dates, their hair and makeup and their suits and dresses for the night while a select few are getting obscene phone calls from a raspy voice. Eventually the time has come for the party but not everyone is having a good time as a maniac in a black ski mask is running around with an axe! Prom has become a fight for survival to find out who is behind the brutal murders and what their motive is.

Disco was dying by 1980 but it was the driving force behind the soundtack for PROM NIGHT. The high energy and bright lights bouncing off the disco ball during the third act of the film provides a great excitement and adrenaline rush for this slasher film. Director Paul Lynch turns a film that barely got finished into a pretty well done horror film that has plenty of the excess in violence and sex that the 80s would become known for. The viewer needs a bit of patience with PROM NIGHT as it is on the slow side. Almost all of the action takes place after the hour mark has passed which creates a 100mph thrill ride of blood and guts. There's still time to build tension throughout the kill scenes including the auto mechanic's garage scene which is one of my favorite parts of the film.

Acting is way above average for a slasher, lead by Jamie Lee Curtis and Leslie Nielsen as the principal. The score and soundtrack which apparently were quite rushed ended up being spot on for the movie and the reveal at the end wraps up the story nicely. PROM NIGHT is a great slasher film that gets better with each repeated viewing.

The Audio & Video
Synapse Films are masters of their craft. No other company does quite as good a job with each subsequent release as Synapse does and they prove it yet again with PROM NIGHT. The 1.78:1 anamorphic widescreen transfer features great clarity and a natural grain structure. Skin tones are healthy and natural while black levels are deep and inky. Colors pop just enough without looking artificially enhanced and there's no noticeable DNR. There are two options for the audio, a DTS-HDMA 5.1 surround track which will give your home theater system a reason to work. It sounds awesome. There's also the original 2.0 mono mix which represents the film perfectly and is also a fine choice. There's no audible hiccups or background noise to speak of. This is a fantastic technical presentation.

The Bottom Line
A classic slasher film on a gorgeous disc packed with special features? Of course I recommend it highly.