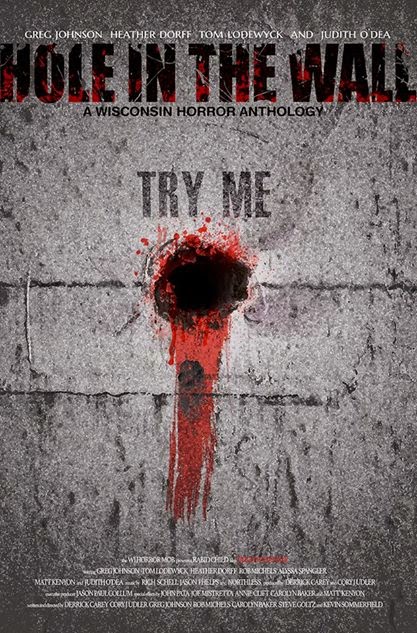 I couldn't wait to sit down and write this review upon finishing the film. I wanted to talk about HOLE IN THE WALL with anyone I could. Unfortunately for me very few people have seen it at this point so I will talk to myself about it in this review. Sit back dear reader, and enjoy until you get the chance to view this wonderfully offensive film.

HOLE IN THE WALL is an anthology film with the only rules being filth, sleaze and horror. The film starts with "A Message From The Underground", a PSA style message to the audience that really should be taken to heart. If you're at all unsure if you want, or more importantly should, view this film, heed this warning. The film gets underway with "The Plainfield Chopper" as a man dragging a wrapped body into his barn while a weird boy watches him. The boy is invited up to experience death. We visit this duo repeatedly through the film as it serves as the wrap around to the various other stories in the film. Each time we come back they are a bit further along in their sadistic fun with the body, making sure not to lose a drop of the blood because the blood makes everything better.

The first chapter of the anthology goes straight for the jugular. The viewer, along with their stomach and their morals are put to the test with "Scumbag". If you manage to make it passed this diabolical delight of bizarre sadism, animal cruelty, necrophilia and murder you may continue with the rest of HOLE IN THE WALL. You'll have to get passed scenes involving shit, semen and blood all with sex and violence mixed in. I promise you'll never look at your fingers the same way again.

Congratulations if you made it with your lunch in tact. And if you didn't, you can live out the rest of HOLE IN THE WALL vicariously through the rest of this review.

"Ed Gein D.D.S." is next and shows what happens when you resurrect an infamous serial killer through black magic and he has a penchant for practicing his own brand of dental work on his victims. This is an uncomfortably brutal take on the already violent and disturbing history of the infamous serial killer. Then comes "Last Dance", a sexually charged piece of filth straight out of John Waters' world. I hope you're prepared to see anything you can imagine because it is possible that "Last Dance" has it and makes sure you're repulsed by it. "Last Dance" is a snow covered descent in to a fucked up family filled with sex and madness.

By this point you've either gone to confessional and been told to say 1,000 Hail Marys or you've lost all inhibitions and are well on your way to become a drooling raving maniac. It's okay to admit that you've thrown up, turned of the film and turned it back on because you just can't look away.

You've been welcomed back with "Siren" a surreal and psychedelic piece of drug fueled horror with victims far and wide. I love "Siren" for the fact that it can easily be taken as a straight forward horror film or a piece of psychological horror using drug use as the catalyst for driving someone to the brink of insanity. We learn the origins of the Chopper in our wrap around story in "Our Song Is My Blade" as a ghostly woman and her disembodied voice haunts a man telling him to kill, and kill he does. "Our Song..." is beautifully violent and brings the story full circle to an over the top climax of blood and guts that looks like it is straight out of an H.G. Lewis film. And just when you think you've survived HOLE IN THE WALL there's a last punch to the gut post credits with "Glory Hole". It is quick but it will certainly have you re-thinking not walking out during the credits.

HOLE IN THE WALL pushes the limits of decency in ways that haven't been seen since films of the 1970s. It is filled with disgusting, despicable and depraved content and is a purely fucked up film. HOLE IN THE WALL doesn't solely rely on being gross and offensive though, there are some truly creative and artistic moments in both the writing and direction of these shorts. From the character interaction in Derrick Carey's "The Plainfield Chopper" that comes off organically with the Chopper almost becoming a teacher of sorts to his new "apprentice", to the heavily colored lighting and direction by Carolyn Baker in "Siren". Derrick Carey showed more directorial skill with the haunting work in "Our Song Is My Blade" with the ghostly voice over work and shots of the woman driving the man to kill.

We shouldn't fool ourselves into thinking that this movie isn't a total gross out though and that is the case with Greg Johnson's "Last Dance". If someone didn't know better they could easily mistake this for something John Waters made in the 60s or 70s. It oozes of the Dreamlanders and Waters' signature sleaze. And fans of more straight forward horror will find plenty of it to enjoy with Cory Udler's ridiculously vicious "Ed Gein D.D.S". When I first heard the title to this short I had no idea what to expect but I half expected some sort of weird spoof. I was happy to find that wasn't the case and it is just an off the wall title for an off the wall piece of nastiness.

The film closes making sure the viewer knows that HOLE IN THE WALL is all about being gross and offensive and filled with motherfucking sleaze in the cherry on top that is Steve Goltz and Kevin Sommerfield's "Glory Hole". I can't say enough about HOLE IN THE WALL it goes places that most filmmakers don't dare think about, let alone actually make and release.

It isn't uncommon for anthology films to be a bit disjointed and lacking in quality throughout but that is not the case here. While the shorts provide the viewer a great mix of content and tone, it is all filthy. Even when there are bits of comedy thrown in it fits the overall tone of HOLE IN THE WALL completely without yelling "I''m fucking funny please laugh at me!" at the viewer. The humor that is present is sick and will make you question if you should laugh, if you're even able to laugh instead of still processing what you've already seen.

HOLE IN THE ALL is a filthy horror anthology made in full by Wisconsin based filmmakers. If this is what drinking the waters of Wisconsin will have you make and enjoy I need to relocate ASAP because I fucking loved this movie. HOLE IN THE WALL is a quality blend of sleazy horror and fantastic filmmaking that strikes many different chords in perfect harmony. HOLE IN THE WALL is ready to turn the independent horror world on its fucking head. I can't wait to get a chance to own this film.

You can find out more information on the film such as release dates, festival screenings and more at the film's official Facebook page HERE
Posted by Celluloid Terror (Seth Poulin) at 6:14 PM