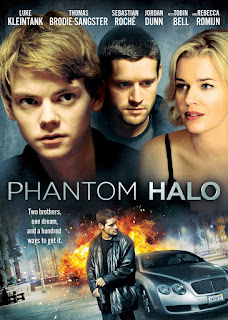 The Film
Samuel and Beckett are brothers who work the streets with their scam of Samuel performing Shakespeare while Beckett pickpockets the onlookers for their deadbeat father who is in debt to just about everyone. Samuel spends his free time escaping reality in his favorite comic book Phantom Halo while Beckett has hooked up with an old friend in a counterfeit money operation. The entire family quickly finds out that they're in over their head as every creditor they know comes for them and they're packing heat.

PHANTOM HALO could be just another direct to video thriller destined to be lost among the oceans of similar movies with nondescript artwork, a cast of unknowns and a plot that is far from new. I hope that isn't this film's destiny though. The script is solid and develops our main characters quite a bit, bringing them from petty street criminals to well rounded, interesting characters. It is this character development that really makes our brothers quite a likable duo. I think that is the biggest factor in what sets PHANTOM HALO apart from the pack - the characters are believable and the characters we're supposed to care about are extremely likable.

It wouldn't be without great acting that these characters would be both believable and likable. Thomas Brodie-Sangster is fantastic as Samuel, his Shakespeare scenes are brilliant while his longing to have a more normal life shines through. He learned the best of what his dad had to offer, which wasn't much and was able to overcome the rest even if it wasn't in the prettiest way. The supporting cast features a few bigger names than our leads and they really help give the picture a solid foundation. Tobin Bell of Saw and Rebecca Romijn bring the fear of organized crime and the emotional side of things to the movie respectively while Gbenga Akinnagbe adds a bit of comedic relief to being a badass. 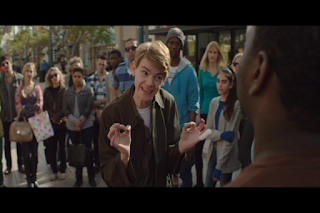 There's quite a few scenes of violence here, it's something the film definitely doesn't shy away from and while it adds that form of entertainment it also helps us sympathize with the brothers. There's only one scene in the film that doesn't fit the tone of the rest of the film and it has to do with Samuel's comic book love. Fortunately it comes and goes and you don't think of it again.

Is PHANTOM HALO perfect? No, the film progresses too quickly. One moment the brothers are bringing in a few hundred dollars picking pockets and in the blink of an eye they're buying Bentleys and hookers with counterfeit bills building a reputation. A slower build would have made this movie feel more substantial and seeing more of the trouble Samuel could get into while Beckett is getting into big money trouble would have definitely been welcomed.

I can't knock the movie too much for what it didn't do because PHANTOM HALO and its director Antonia Bogdanovich deserve a lot of credit for what they did do.

The Audio & Video
Arc Entertainment delivers PHANTOM HALO on DVD with an anamorphic widescreen 2.35:1 transfer keeping the film's original aspect ratio in tact. All things considered this is a standard and acceptable A/V job. The picture is clean, with average sharpness and a good color palette. The English audio is handled through a clear 5.1 Dolby Digital mix that is damage free. 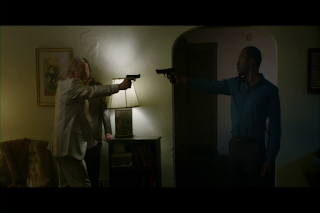 The Extras
A trailer is included but nothing else 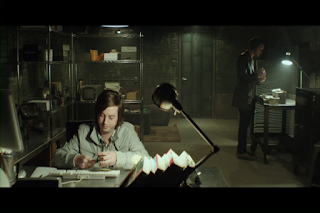 The Bottom Line
PHANTOM HALO rises above the droves of indie thrillers that flood store shelves on a weekly basis with its solid writing, great acting and likable characters. A very entertaining 89 minutes.