Since the news broke last night that Wes Craven had passed away from a battle with brain cancer I have been debating back and forth if I wanted to write anything about him here as I have done in the past when someone notable to genre film or someone notable to me personally passes on. It isn't that I don't feel Wes Craven is notable enough to deserve my words, in fact it is quite the opposite and the reason which I have decided to post something. My hesitance was because I didn't want this to turn into something where I break down his films and in turn, whether intentionally or not, attack his legacy. It is no secret that I didn't find Wes Craven to be an "elite" director all things considered, but I did respect the hell out of his work and his legacy and am a huge fan of many of his films.

Wes Craven forever changed the landscape of exploitation with 1972's The Last House On The Left. This cold, pessimistic and downright mean film spawned dozens of copy cat films throughout the decade. From its impossible to forget tagline to showing us some of the most depraved acts Craven would ever film, The Last House On The Left is forever embedded in American film culture for better or worse.

Craven would similarly change the landscape of horror forever when he introduced Freddy Kruger to the world in 1984. By no means a forefather to the slasher genre, Freddy gave the body count film a face, a personality and an attitude that may have needed to come a bit later in the cycle to really work. The film was downright terrifying, featured incredible special effects and in later sequels would give us arguably the downright coolest and most beloved monster in horror history. And maybe the timing was perfect as the amount of masked, silent and nameless killers that had come in the 6 years or so between Halloween really popularizing the genre and Freddy's debut left the audience ready for a hero to latch on to that they could quote and talk about with friends. The discussion of a hockey mask and machete can only go so far, but quoting Freddy and talking about all the dream scenarios could last forever.

Then a decade later Craven would do it again with Scream. The self referential, meta horror film from 1996 poked fun at the money making machines of the decade before it, where teens were killed off in a world full of cliches. Craven dipped his toes in the idea a couple years before Scream with New Nightmare, another Freddy Kruger film before nailing the idea with Scream. Scream was a smart film, and very well made. It had been long enough since the slasher craze died down that horror fans could begin to poke fun at themselves with the ideas Scream presented, perhaps something they weren't willing to do with Freddy on screen just two years earlier.

Wes Craven created two cultural icons in the horror genre, Scream's Ghostface remains a popular Halloween costume and is instantly recognizable and Freddy is the pop culture phenomenon he was in the late 80s. Not too many people can claim that sort of success and Craven didn't rest his hat on those two franchises as he made the brilliant The Serpent And The Rainbow which to this day I hold as one of the most underrated (in the sense that it doesn't get brought up in discussion very often) horror movie of all time and made a fantastic horror/exploitation film with The Hills Have Eyes.

When Craven succeeded on a film he really succeeded. He was able to bring these fictional stories and characters to life that resonated on a level of realism that terrified audiences and created nightmares. 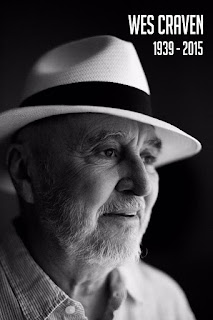