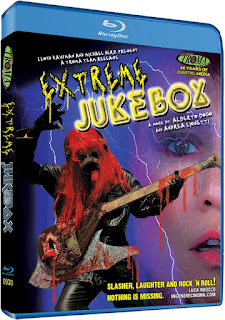 The Film
The town of Nova Springs is a hotbed of musical talent and fandom. Hard rock and metal rule and you're either a star on stage or a groupie or fan hanging out at the local record store or nightclub. Unfortunately a masked killer known as Naughty Rocky Boy is butchering people with a variety of instruments turned weapons. Naughty Rocky Boy isn't the only killer though, as one of the local hands has unearthed a cursed record of a deceased rock legend unleashing the mythical Killer Of The Woods on the town.

EXTREME JUKEBOX is Italy's answer to heavy metal horror. This slasher has a bodycount that Jason Voorhees wouldn't snicker at and a good bit of blood to go with it. It also feels like it should have been made around the time Jason was found on the silver screen on an annual basis. The film so badly wants to be cool but it feels like a middle school student in a rock band t-shirt awkwardly standing against the wall at a school dance all alone. The music references and styles are so far out of date that it is almost embarrassing. I was ready for an Axl Rose cameo, really. Both killers have a goofy get up that look silly and one reminded me of the DVD artwork from Full Moon's The Dead Hate The Living. Intentionally cheesy doesn't have to equal stupidly bad.

Watching the film is awkward, as it is choppy and at times all over the place jumping back and forth between storylines that hardly intersect. It isn't that the film is difficult to follow, and it shouldn't be, it is after all a slasher film, but the editing makes the film feel all over the place. It's one of several big problems that plague this movie.

What I had hoped would be a great addition to rock 'n roll horror movies such as Rock 'N Roll Nightmare, Hard Rock Zombies and Black Roses, all of which use their scripted music to add to the genuinely cool vibe of the film and are campy in the best of ways, EXTREME JUKEBOX is the exact opposite. It tries to force itself in to being cool and is low quality cheese instead of being that expensive imported stinky stuff it could have been. I hate to use the word but EXTREME JUKEBOX is a "poser" of what it longs to be.

The Audio & Video
Troma releases this Italian production on Blu-ray with a 16x9 anamorphic widescreen transfer and things looks good with a nice sharp picture and a strong color palette. Detail levels are high while black levels are good but suffer a little bit from crush. The Italian audio features English subtitles that are timed perfectly and are usually translated very well, only occasionally suffering from the odd awkward translation. The audio is well mixed and levels are steady with no signs of damage and no background noise.

The Extras
-Behind the scenes documentary
-Slide show
-Trailers

The Bottom Line
I wish EXTREME JUKEBOX lived up to the quote on the back cover of the Blu-ray that reads "The most brilliantly demented Italian film since Argento's Deep Red." but unfortunately it is far from brilliant and in absolutely no way, shape or form in the same league as even Argento's worst efforts.

EXTREME JUKEBOX is available HERE
Posted by Celluloid Terror (Seth Poulin) at 11:38 AM