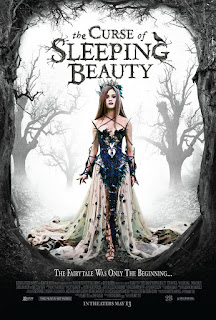 Thomas Kaiser has recently inherited a family estate that has been in his family for generations from an uncle he never knew and quickly finds out that the family curse has also been passed on to him and he is now forced to guard the house and the evil demons housed within its walls. While Thomas does his best to find a way to break the curse he also tries to awaken Briar Rose, a beautiful young woman kept asleep in another world that have haunted Thomas in his dreams.

THE CURSE OF SLEEPING BEAUTY is an interesting and original take on the Grimm Brothers fairytale and a far departure from the Disney story we all grew up with. Director Pearry Reginald Teo shows some flare and style throughout the picture and creates a spooky atmosphere within the walls of the old house, enhanced by the evil mannequin artwork that comes to life. That is the stuff of nightmares and reminds me greatly of something I'd have seen in an episode of Are You Afraid Of The Dark. That was an example of simple yet effectively creepy filmmaking. Aside from the evil mannequins there are a few other creepy visuals including the Veiled Demon who looks like something out of Todd McFarlane's imagination.

The film mixes fantasy and horror that at times is visually stimulating but there's too much going on for its own good. By the end of the film we're left with loose ends, characters that were around for no real reason. On top of the throw away characters that stop Thomas from really being able to develop along with the story, the performances aren't great and there's too much comic relief written into them. Ethan Peck is suitably the highly of the cast as the lead.

It feels like Pearry Reginald Teo wanted to make a stronger horror film but was forced to keep the fantasy elements lighter to cater to a younger audience.It's that problem that keeps the script from feeling anything but misguided and pulled in too many directions without being able to feel comfortable in its own shoes. THE CURSE OF SLEEPING BEAUTY is a missed opportunity at creating something that really stands out from the pack of week to week genre films but isn't without its merits.

Posted by Celluloid Terror (Seth Poulin) at 11:42 AM