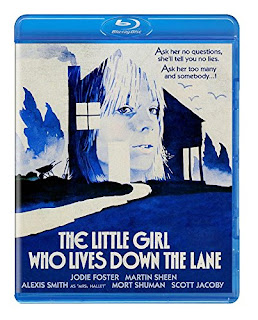 The Film
Thirteen year old Rynn lives in a secluded house outside of town with her recluse father who writes poetry and is often out of town. Rynn has caught the attention of the town pervert who also happens to be the son of their nosy bitch of a landlord who suspect that Rynn may be hiding a dark secret but Rynn is willing to protect her private life at all costs.

THE LITTLE GIRL WHO LIVES DOWN THE LANE has long been on my radar as a film I've wanted to see but it eluded me until now and perhaps that's a good thing given the excellent quality of this release. Young Jodie Foster carries this film on her back, giving a strong and mature performance alongside veteran Martin Sheen who is deliciously despicable as the pervert who lusts for smart teen despite having a family of his own. Alexis Smith is instantly unlikeable and someone you're ready to see get what is coming to them which is the highest praise I could possibly give her character. The cast of the film is small, with only a few other supporting characters including Mario, the loner boy who Rynn connects with and his policeman uncle who is one of the few good guys in the movie. These key players are what make the brilliantly sharp and tight screenplay by Laird Koenig which was based on his own novel, a complete success.

The story has very few major moments of impact and while those moments carry a ton of weight to them it is the subtlety in the small things, such as Rynn withdrawing money at the bank and dialogue exchanges that really build the characters and suspense. Director Nicholas Gessner creates that suspense brilliantly with a straight forward, matter of fact style that plays into the film's simplicity and relateability. There's nothing in Hollywoodland that is preventing this film from being reality and it's that relateability that puts the viewer in a protective guardian role over Rynn. We're instantly drawn to her and want to protect her from the outside world that she's largely removed herself from but keeps creeping in on her. She hardly needs our concern or guidance but it's that intense connection that makes THE LITTLE GIRL WHO LIVES DOWN THE LANE a special film.

THE LITTLE GIRL WHO LIVES DOWN THE LANE is bit difficult to describe as it is very much a suspense thriller with horror elements but it's so character driven and based around Jodie Foster's performance that you almost cheat the film of its power and importance by simply calling it a suspense thriller.

The Audio & Video
Kino Lorber gives THE GIRL WHO LIVES DOWN THE LANE it's high definition debut with a gorgeous looking Blu-ray that features a 16x9 anamorphic widescreen transfer. The film has a rich natural film look with healthy grain and no digital scanner noise. Colors are pure and black levels are deep with no signs of compression or blocking. Detail level is exceptional from skin tones and hair to textures and surfaces like clothing and dirt. The DTS-HD Master Audio mix features a fantastic mix with steady levels and a crystal clear sound. There's no background noise, crackling or popping and dialogue is perfectly balanced with music.

The Bottom Line
THE LITTLE GIRL WHO LIVES DOWN THE LANE will please audiences across genre boundaries. Everyone should know about this mini masterpiece and there's not better way to see it than this release from Kino

THE LITTLE GIRL WHO LIVES DOWN THE LANE is available HERE
Posted by Celluloid Terror (Seth Poulin) at 12:20 PM