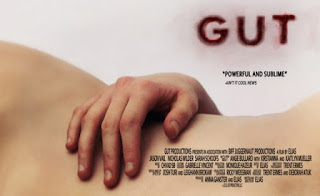 Tom is tired of his go-nowhere suit job, and is letting it affect his life at home with his wife Lily and daughter Katie. They've begun the process of looking for a new home away from the city, much to the chagrin of Tom's childhood best friend and co-worker Dan. Tom and Dan's friendship was based largely on their mutual love of horror films, something that Tom has grown out of with time and his growing family. Dan has recently received a disc that has him very excited to show his friend, one of a woman being lustfully sliced open in a surgical fashion and it all feels much too real. These discs keep coming, and viewing them starts to mess with both friend's psyche. Tom has nightmares of the images, and Dan's new girlfriend ends up murdered. Their relationship is falling apart from these possible snuff films and their lives are at stake when Tom takes a short trip to continue the search for a new home and job and returns to find his worst nightmares have come true.

GUT was directed by Elias, and is a low budget psychological horror film, that has a few moments of really well done effects. The acting from men carry the weight of the film with no trouble. It is a surprisingly strong performance from the whole cast really, except perhaps the bitchy diner waitress who is overdoing it. The soundtrack is subdued, as it should be, adding to the mood but never becoming something you notice. GUT is a solid effort. The main problem is that it goes exactly where you expect it to go, without any twists or turns along the way. It sets a goal and head's straight for it, and in some cases that is fine and works for that particular film. With what GUT is trying to accomplish it keeps the film from excelling and being "next-level".

GUT is a promising film, that just lacks a couple of punches to the viewer to really make things interesting. It is a shame that it ends up being a mono tone affair because it didn't have to be and it holds the film back from better things.
Posted by Celluloid Terror (Seth Poulin) at 3:43 PM