With the release of an American remake imminent, I decided to watch the original Spanish production of WE ARE WHAT WE ARE (Somos Lo Que Hay). 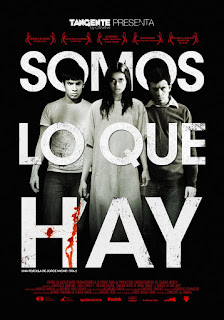 After the sudden death of their father, Alfredo, Julian and their sister Sabina must rise above their negative, gloom and doom mother to keep the family, and its traditions together. Alfredo is the oldest and smart, but shy and naive and is next in line to be the man of the house. It doesn't take long for the family to reveal that they are cannibals. However the fact that they live in a busy city is a bit different from the normal backwoods, or jungle cannibal family.

Most of the potential for thrilling, scary or exciting situations based on the setting and plot are wasted as the film revolves around the families incredibly grating Lifetime Channel drama. I wanted nothing more than the mother to get slapped across the face for being an obnoxious piece of shit throughout the entire film. For a starving family of cannibals she sure is a picky bitch when it comes down to what type of person she'll eat. There is also a half assed police investigation subplot that never comes together to make the screen time it uses worth it. The brother Alfredo and his sister Sabina are the bright spot of the film, as he deals with who he is in the face of trying to provide for his family in this insane scenario and she is the brains of the family trying to play puppet master to everyone to make it work.

WE ARE WHAT WE ARE is directed by Jorge Michel Grau in his feature debut. He is perhaps best known now for his entry into The ABCs Of Death with the entry for the letter I, which apparently didn't stick with me for better or worse as it doesn't ring a bell to me at all. This movie is capably directed but again, it is a wasted opportunity. While not terrible, it does leave the door open for the American remake to surpass it. I'll be interested in checking that out when it is released.