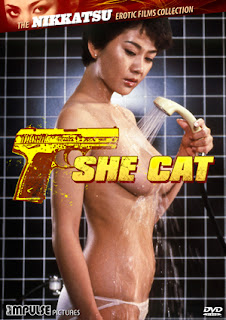 The Film
It has become apparent over the last year of viewing these Nikkatsu Roman Porno films that as long as a particular film satisfied the studio's requirements for nudity and sex that it doesn't really matter what kind of movie the screenwriter and director have come up. SHE CAT takes a turn for the ambitious, with a run time considerably longer than the average Nikkatsu title (many coming in at under 70 minutes) this mix of criminal underworld, plot twists, violence, car chases and sex certainly stands apart from the rest of the collection so far released in the US. While not all of the elements work, and the movie's flow is a little bit off at times it certainly is an entertaining film with high production values. The direction is stylish, with a noticeable similarity to Argento's Tenebre (which Jasper Sharp points out in the liner notes) and the camera work matches. 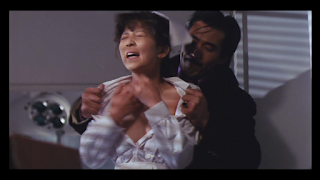 SHE CAT is a fun flick that has a bit more to offer than the average Nikkatsu production and it is successful at being entertaining even if the film itself is a bit messy at times. It is interesting to note that in the liner notes Jasper Sharp makes mention of how many people involved in this flick had a fleeting relationship with the studio which perhaps explains why SHE CAT goes beyond the typical and attempts to be something more. 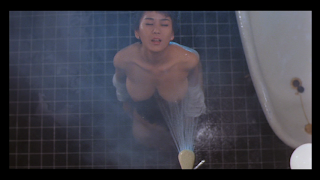 The Audio
A well mixed 2.0 mono soundtrack takes care of the sound side of things, with the film being in it's native Japanese. Dialogue is crisp and clear with the soundtrack being lively in the background but never becoming overbearing. Optional English subtitles are available and necessary unless you speak Japanese. The subs are translated nicely and timed perfectly.

The Extras
Along with the liner notes that are adding up to an encyclopedia at this point, is the original theatrical trailer. 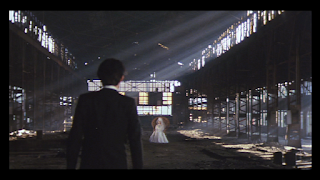 SHE CAT is available HERE
Posted by Celluloid Terror (Seth Poulin) at 7:07 PM