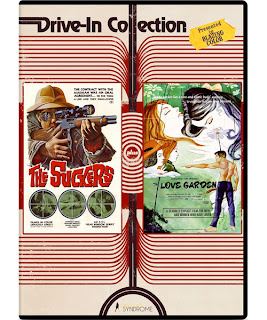 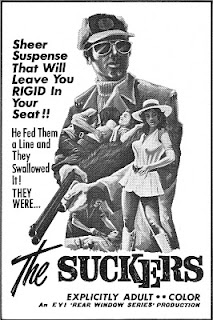 A very wealthy big-game hunter has grown tired of killing animals. The passion has left him as there is no challenge left. He still holds hunts on his ranch and has invited the owners of a modeling agency and some of the talent to be his guests for a weekend and take some photos and the like. There is very little said about the hunt for the first part of the visti, instead the first 50 minutes of the film are filled with all sorts of sex. When the hunt finally happens it is revealed that there are no animals on this hunt, instead the guests are fighting for their lives against a madman and his sicko guards. 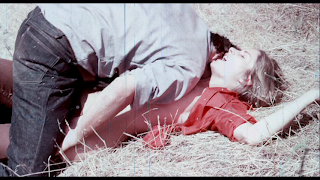 THE SUCKERS knows what it is and that is an excuse for sex and rape to be shown on screen. It isn't necessarily a bad thing but it could have been a top notch piece of exploitation. While the first 2/3 of the movie are eaten up with plenty of sex, some a bit more hardcore in nature than the rest, the ending hunt scene is rather lazy with a chase and capture scenario happening with each captive victim and no real set up or payoff. There is a lack of tension and dread despite the scenario. There is a rape scene including one of the models and a guard that is a nasty affair, perhaps the best part of the film. Stu Segall (as Arthur Byrd) directs this and seems to cheap out on it, making just enough of a movie to pass but not be anything great. 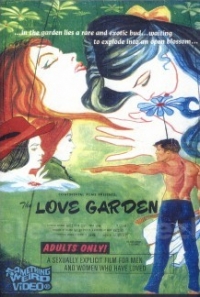 THE LOVE GARDEN features magazine article writer Mike falling for his new neighbor Claire the first time he sees her at the pool. Claire lives with Inez and passes on Mike's invitations for dinner and a movie. Mike is a persistent man, and quickly learns the truth of Inez and Claire's relationship which makes him want her even more. Eventually Claire accepts an invitation and Mike professes his love to her.

A quick moving, 70 minute drama revolving around a pair of sex scenes, THE LOVE GARDEN is more interesting than it sounds on paper. The three characters are the entire cast of the film but they each have different layers and emotions that they go through which really keeps things interesting. The simple storytelling and voice overs from Mike really work to make this a pretty good little film.

The Video
THE SUCKERS is presented in a 1.85: widescreen transfer that is in rough shape. From start to finish the picture is littered with green and blue scratches and marks. Underneath, the transfer seems to be pretty decent however with colors having a nice natural look to them. The age and condition of the source material certainly show with a few wobbles but it definitely adds to the vibe for this Drive-In Collection release from Vinegar Syndrome. 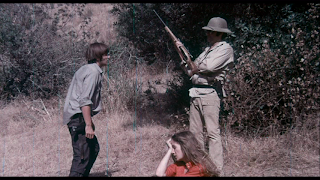 The transfer for THE LOVE GARDEN is a nicer affair. The condition of the print is in nicer shape with a fairly sharp look and a print that has damage marks and some dirt and debris but it isn't nearly to the point of the first feature and is all around an enjoyable view. The film is presented in a 1.37:1 aspect ratio. (I couldn't get a screen shot from TLG because VLC Media Player wouldn't play that feature, just kept crashing. Not sure why)

The Audio
Similar to the video, THE SUCKERS is filled with hissing, pops and cracks throughout but it never interferes with the dialogue. Not a pretty sounding track but it matches the video quality and is serviceable. This is more about the experience than perfect quality. THE LOVE GARDEN has a solid and stable audio track from start to finish, it is never really pushed to any sort of extreme but it handles its duty nicely.

The Bottomline
While neither of these films will ever be called "classic" or "must-have" they are both entertaining in their own right and deserve a place on any exploitation film fan's shelf along with the rest of the Drive-In Collection from VinSyn (reviews coming soon!)

THE SUCKERS / THE LOVE GARDEN Drive-In Collection Double Feature is available HERE
Posted by Celluloid Terror (Seth Poulin) at 11:46 AM