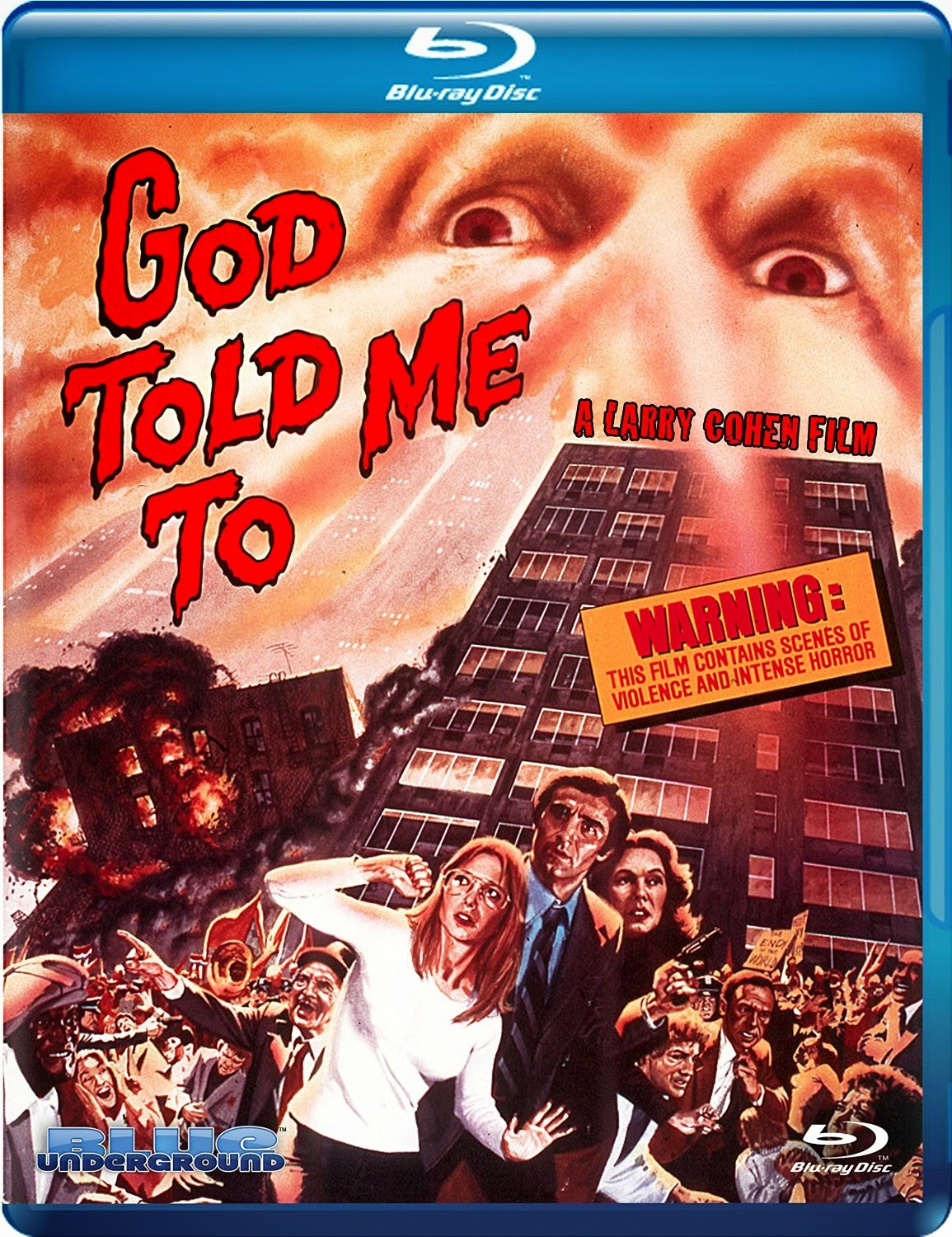 The Film
A man sits perched atop a water tower in New York City armed with a rifle and opens fire on the lunch time crowds on the streets below, striking well over a dozen victims without a single miss. When detective Peter Nicholas (Tony Lo Bianco) ascends the tower to try and talk the shooter down he asks what has made him commit this crime and the shooter responds simply with "God told me to." before hurling himself off the tower to his own death. Thus begins one of the strangest experiences you're ever going to have with a film.

Detective Peter Nicholas continues to investigate a bizarre string of killings plaguing the city where all of the murderers claim that God has instructed them to kill. Nicholas' investigation takes him on a strange journey of alien abduction and insemination, virgin births, unholy faith and more violence. It is only when he discovers his true connection to it all that he will be able to stop it.

GOD TOLD ME TO is a film that may only have been able to be made when it was made. Larry Cohen may have been king of the drive-in film with works such as The Stuff, Q The Winged Serpent, Black Caesar and the It's Alive trilogy to name just a few. GOD TOLD ME TO may be his best work however and quite possibly his weirdest. In what plays out like any detective crime story, we're thrown through a whirlwind blender of demonic horror and off the wall science fiction twists. Cohen's writing certainly had a more is more attitude with this film and it somehow all comes together and works. His tight, moody and sometimes stylish direction aids in that. In a film that perfectly shows off New York City's grittiness of the period it's worth noting as an accomplishment that he's also able to pull off perfectly lit and artistic shots with some heavy handed use of colored lighting.

Tony Lo Bianco and the rest of the cast that reads like a who's who of various eras of Hollywood, give everything they have to bring Cohen's script to life without a single ounce of cheese, ham or overacting. This film would fail if the actors corn balled up their performances and it is something that Larry Cohen wouldn't have allowed, especially with the talent he had on board. From Andy Kaufman's first screen appearance to Richard Lynch and Sylvia Sidney nobody misses a beat.

The fashion in which the story progresses will have the viewer fully locked in and engaged wondering just what the hell will happen next. It may take a minute (or more) to process some of the big turns the film takes but you know what? It's a blast and somehow Cohen pulls it all together for a fucking awesome piece of bizarre drive-in cinema.


The Audio & Video
Blue Underground's release of GOD TOLD ME TO is absolutely stunning. The 16x9 anamorphic widescreen transfer has been scanned in 4K from the original negative and the results couldn't be nicer. The print is clean and in excellent condition. Colors are vivid and pop off the screen in breathtaking fashion. There's substantial detail shown in textures, surfaces and close ups. Black levels are deep and inky and handled with skill as there's no blocking up whatsoever. Skin tones are healthy and natural without any sign of waxiness from excessive DNR.

The English audio track is handled with a 7.1 DTS-HD mix that is pretty much perfect. The mix is boisterous and powerful while featuring subtlety that allows for a perfect balance of dialogue and score. There's no damage to the track such as popping or crackling and there's no background noise. Frank Cordell's score was in perfect hands for this disc.

The Extras
A fairly extensive lineup of special features are included:

The Bottom Line
This will be a disc that future drive-in era exploitation film Blu-ray releases will held to. The incredible A/V presentation with a healthy selection of extras makes this Blue Underground release essential to any fan of horror, exploitation, or oddball cinema.

GOD TOLD ME TO is available HERE
Posted by Celluloid Terror (Seth Poulin) at 12:06 PM