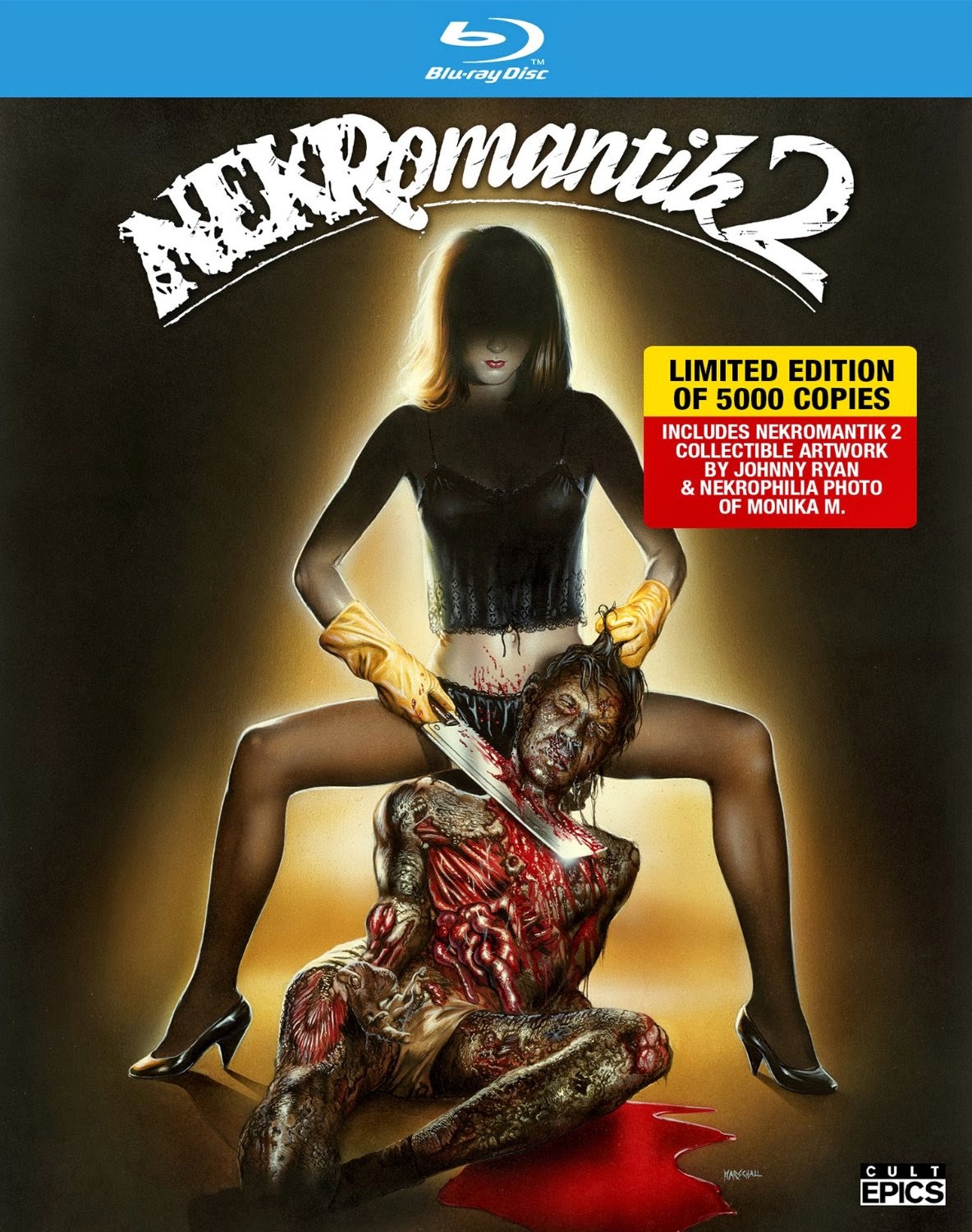 The Film
Three years after Jorg Buttgereit shocked and disgusted the underground film world with Nekromantik, his film about a man who brings home a corpse for his and his wife to fool around with he returns with the sequel where a woman tries to hide her love of necrophilia from her new boyfriend but keeps a rotting corpse around her apartment. The woman is torn between her two lovers and finally makes a choice that seems to have been the right one.

NEKROMANTIK 2 upholds the legacy of the first as both a nasty film and a controversial one. The German government attempted to seize and destroy the film including it's negative. Luckily they weren't able to get their hands on the negatives because this film is quite good. Buttgereit's follow up is bigger in production and scope and he manages to craft a well done love story out of a disturbing subject matter. The performances from Monika M. and Mark Reeder are good, both being believable in their roles and keeping things grounded. The special effects work is gooey and gross in the best way. An exceptionally well done job.

The weak point of the film is the pacing. There are stretches of the film that are painfully slow and could have been cut to make the film sleeker and more streamlined without losing any impact. If NEKROMANTIK 2 was an 80 or 85 minute affair it would flow better and be a better film altogether. The film is still quite good despite the pacing issues. It is a great companion piece to the first film while being able to stand alone on its own two feet.

The Audio & Video
Cult Epics give NEKROMANTIK 2 its high-def debut with this Blu-ray that sports a full frame 1.33:1 transfer, maintaining the film's original aspect ratio. The 16mm photography looks excellent here with highly increased detail levels over previous DVD releases. Skin tones are fleshy and natural without a hint of waxiness. There is some light speckling and minor scratches on the negative used for the transfer but it adds to the overall feel of the movie if anything. The transfer is warm and natural and I can't imagine it ever looking better.

There are three audio options for the film, all in the film's native German with optional English subtitles. I listened to the Dolby Digital mono track which is how the sound was originally recorded. This track sounds very nice with a good mix job on dialogue and the film's fantastic score. The English subtitles are timed and translated perfectly. Also included are Dolby 2.0 and 5.1 tracks.

The Extras
Cult Epics adds a nice selection of extras to their great technical presentation.

The Bottom Line
Over 20 years later and NEKROMANTIK 2 hasn't lost an ounce of gross out or shock factor. This new Blu-ray from Cult Epics will allow a whole new and much wider audience to experience the film than ever before and that warms my heart just a little.

NEKROMANTIK 2 is available HERE
Posted by Celluloid Terror (Seth Poulin) at 11:22 AM