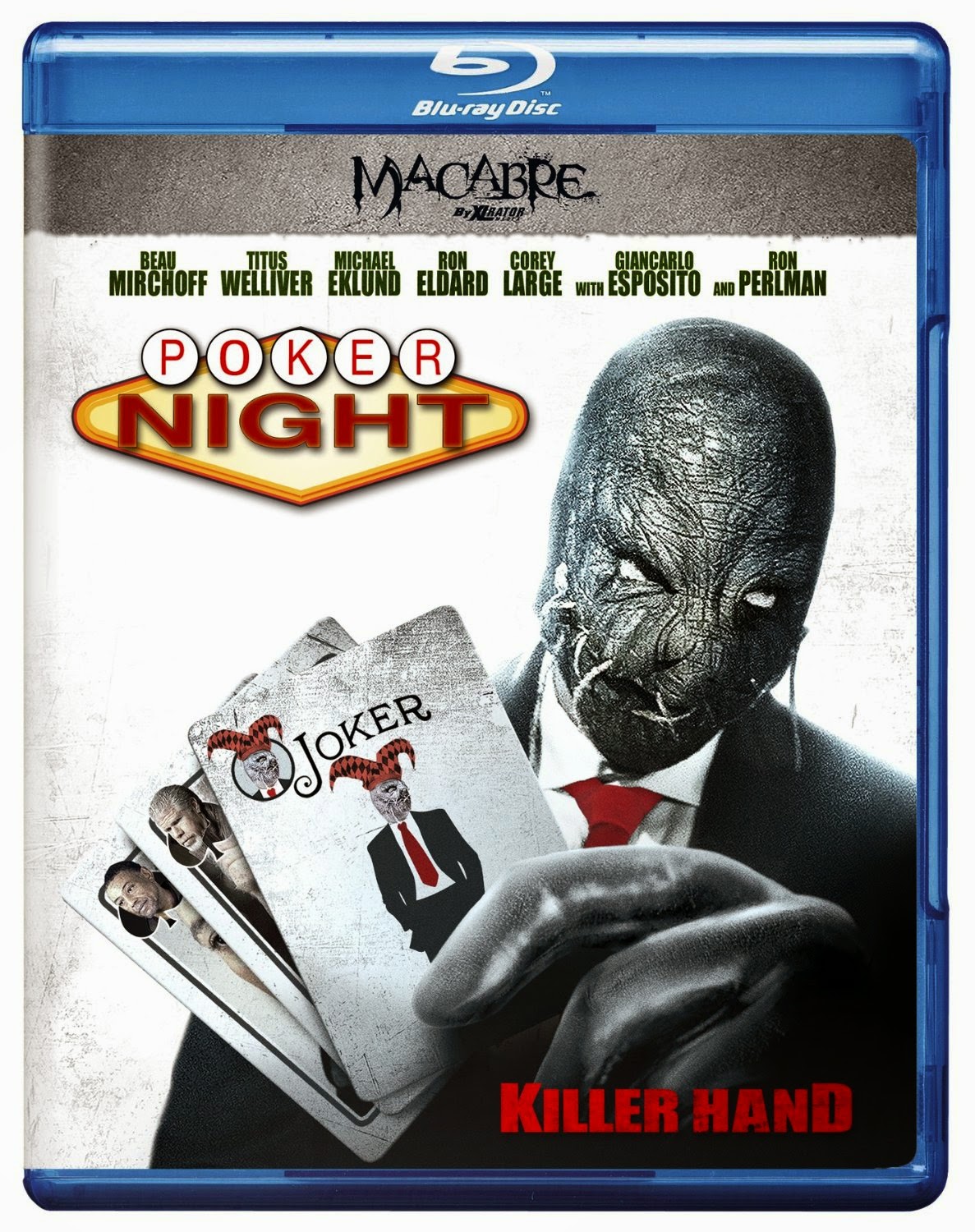 The Film
Newly appointed detective Stan Jeter is invited to his first poker night with some of the best detectives on the force. The group uses their poker nights to swap stories and give insight to the new guys as much as for a night of fun and harmless gambling. Jeter quickly learns of their triumphs and failures and the lessons and knowledge they all learned from various stories and he'll immediately have to put them to use to try and match wits and survive being captured and held in a basement while tortured for weeks.

POKER NIGHT starts off with great intensity and tension. The killer's menacing look adds to the fear quickly being imposed in the viewer. The stories being shared around the table by the veteran detectives are all interesting and well done in their flashbacks and montages. Jeter's predicament features some very nasty and violent scenarios but unfortunately the back and forth from Jeter's situation to the poker table draws the viewers attentions elsewhere and the focus is put on the other stories which are frankly more interesting than Jeter's.

The performances are all very good, including a much larger role for Ron Perlman than I had predicted. The direction is stylish and the editing is tight. Unfortunately it is the writing from Greg Francis that let's his own direction and overall film down quite a bit as the film's most interesting parts are not based around its main character. POKER NIGHT remains a pretty well done film, and it is violent and entertaining from start to finish and while the meat and potatoes of the film aren't the most interesting part the villain is a smart and pretty well thought out killer.

The Audio & Video
XLRator Media's 2.35:1 anamorphic widescreen transfer is stunning. Detail levels are high in surfaces, textures and close ups, while colors are vivid. Skin tones look fleshy and natural and black levels are deep and don't suffer from pixelation or blocking up. The source material is crystal clear and clean as can be. The 5.1 DTS-HD Master Audio track is crisp, clear and dynamic. The mix job is excellent letting the dialogue and score channels mix nicely. There's no damage or audible annoyances to speak of.

The Bottom Line
POKER NIGHT has some interesting scenes and some well done moments that make it worthwhile.

POKER NIGHT is available HERE
Posted by Celluloid Terror (Seth Poulin) at 11:57 AM