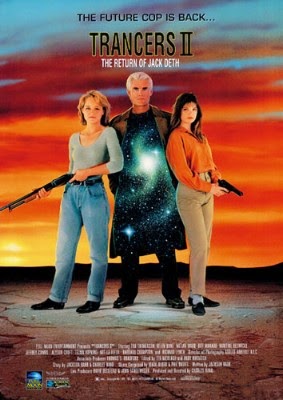 Apparently I've seen very little of the Trancers franchise as far as full films go and have really only seen clips from various movies. TRANCERS 2 was rather unfamiliar to me except for recognizing Jeffrey Combs character in the movie. This is an entertaining follow up to the first movie which is surprisingly well made. Charles Band surprises again as this sequel is pretty well made too even if the cheese factor is upped even more. Drunken bum baseball was a highlight of the movie and the idea of a "trancer farm", while not really original , worked well. Thankfully thin aluminum carriages can stop assault rifle bullets or our heroes would be in big trouble! 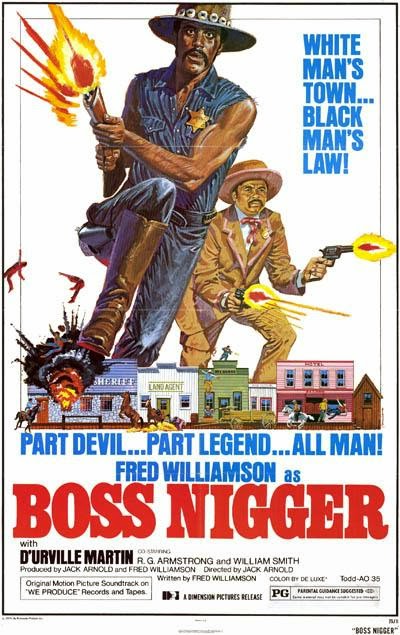 Next up was BOSS NIGGER, a blaxploitation western written and produced by the film's star Fred Williamson and directed by Jack Arnold. This is a sequel (of sorts) to fellow blaxploitation westerns The Legend and The Soul Of Nigger Charley. I've never seen the Charley films but after viewing this one I want to even more. Those films need a release! Anyways, Fred Williamson plays the badass bounty hunter who rides into town and appoints himself sheriff and his friend his deputy. They create a series of laws banning any sort of disrespect to lawmen or the use of the N word. Hefty fines or immediate jail time don't stop the locals from having a problem with them, almost to the point of supporting the gang that has plagued their home in the past. BOSS NIGGER is fun, and features a funky and catchy theme song. The film really empowers Boss and Amos as they have to fight damn near everyone one way or another. The action scenes are fun and mostly well executed but I found it to be surprisingly light in terms of violence and overall excitement.

I had just received the brand new Blu-ray from Synapse in the mail the day before so I figured I'd waited long enough and popped in LONG WEEKEND, the nature's revenge film from Australia. I have to say while I did enjoy the movie, it was a disappointment. I really expected to love this movie but found myself wanting more. More of what you ask? Well, everything. Everything except marital problems. This fighting couple takes a trip to a secluded beach and fight the whole fucking time. While there they show no regard for their natural surroundings as they litter, shoot wildlife, use chemical bug sprays and act like general assholes that you'd find in Cancun on Spring Break. Tired of the disrespect, nature fights back with attacks from various creatures that threaten the lives of the couple we've come to hate. This tale ripe with social commentary is well made and features a really cold vibe towards the real antagonists of the film, people. I was hoping for a more explicit film with more on screen horror and violence as there's not a ton in the way of that. 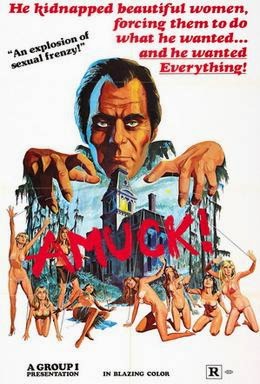 Finally, my first giallo of the challenge, was AMUCK!. This movie was recently released on DVD by Code Red in an edited version, but it doesn't seem to missing too much in the way of story at least. Of course I want an uncut version, but being able to own this at all is good for now. This film starring Farley Granger, Rosalba Neri and Barbara Bouchet follows a young American woman who gets hired as a secretary for a writer. Little does the writer know that his new secretary took the job to investigate the disappearance of his last secretary but quickly she falls victim to his suave ways and gets involved in his games of drugs, torture and orgies and her life may be in danger. AMUCK! definitely focuses more on sex than violence but it does have a few moments of horror that are really good. I loved the hunting scene in the marsh and the focus on sex to sell the picture will get no complaints from me. These are gorgeous women on display! I'm not sure if the full uncut version will add anything to the film or not but I did enjoy what I saw.