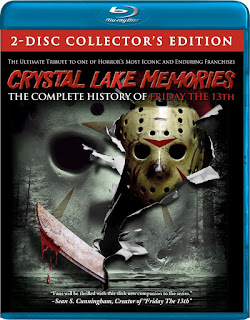 Inspired and based upon the fantastic book of the same name, CRYSTAL LAKE MEMORIES: THE COMPLETE HISTORY OF FRIDAY THE 13TH is one of the finest film documentaries ever made. Documenting the 12 films and TV series under the FRIDAY THE 13TH banner that span three plus decades, this doc features sit down interviews with over 150 different cast, crew and executives from the series talking about the films, their experiences, the reception and legacy of the films they worked on.

Filled with great stories, outtake footage and more information then you can possibly soak up in a single viewing CRYSTAL LAKE MEMORIES has significant rewatch value and may only be trumped by the Nightmare On Elm Street series documentary "Never Sleep Again". CRYSTAL LAKE MEMORIES would be just a bit better if less time was spent discussing the plot of each film and more time was invested in behind the scenes stories and rare information nobody else besides cast and crew would know. This is a minor gripe and doesn't detract from my opinion on this documentary much at all. Oh and then there's Cory Feldman's narration that goes full blown Frog Brothers at points and it gets a little annoying... blah blah, just watch it and love it!

The Audio & Video
RLJ/Image Entertainment deliver a beautiful Blu-ray and it should be no different. Sit down interview segments should look sharp and pristine and they do here. There are some rougher areas throughout the film such as rare cut footage from the films that are in beaten and battered shape but the newly produced footage looks as it should. And it sounds as it should, with a simple but very well done mix job.