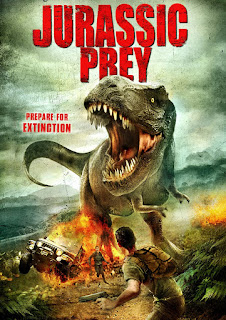 The Film
"You played a tattered ass Bigfoot and you think you know about bears!"

If the rest of the film was as great as that line is this would be a cult classic. Even though it will never reach the status of cult classic, JURASSIC PREY does play itself into the hands of drunken entertainment. The story of a prehistoric dinosaur being freed after an explosion in some mines and terrorizing a forest where some bank robbers are hiding out is both stupid and ridiculous in a mildly entertaining way.

The acting is okay, the writing is a ham and cheese sandwich with some laughs scattered throughout and the dinosaur looks to be somewhat poorly rendered stop motion animation with shitty CGI blood effects that are good enough for a chuckle each time it's on screen. Even though the movie is short enough to not overstay its welcome you'll be thankful to see the credits when they start to roll. 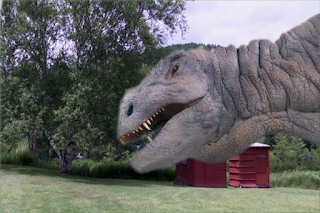 I wouldn't put JURASSIC PREY on as the night's only entertainment. I'd save it for the tail end of a night of drinking when you need something that doesn't require your undivided attention or your most stable and sober mindset.

The Audio & Video
Wild Eye Releasing's DVD release of JURASSIC PREY is pretty standard and passing grade material. The 16x9 transfer is relatively sharp and the digital photography is obviously free of any dirt or debris. Meanwhile colors are decent. The English 2.0 audio fares about the same. It gets the job done without being anything to write home about. There's no damage and the levels are mixed adequately. 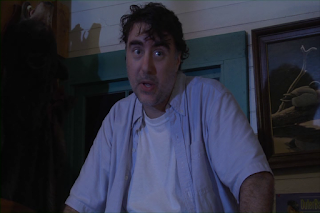 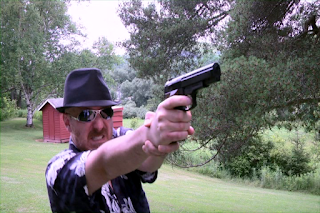 The Bottom Line
What can I say, it's worth a drunken watch to laugh at.