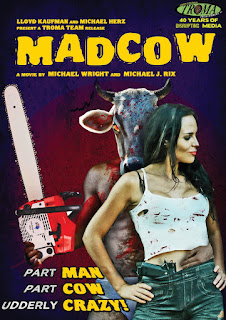 MADCOW was written and produced with a very obvious Troma state of mind. It's only appropriate that they have picked it up for distribution. Had I not known otherwise I would have thought this was an actual Troma production. It's silly, a bit gross, cheaply made and poorly written. It's also mildly entertaining, but only at times. The film is intentionally stupid to play up that side of the comedy which is what the film really relies on. Make no mistake, MADCOW is a comedy first. 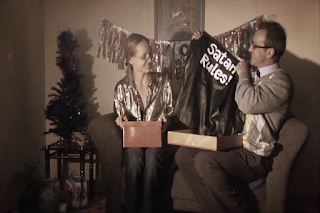 From a quality standpoint there isn't much. The acting is hammy and the effects are shitty. The cow monster design looks like a high school mascot, which I actually thought worked for his look but he by no means looks like an organic creature. MADCOW has some sporadic entertaining moments but for the most part didn't leave me feeling much of a reaction either way and that might be even worse than making me hate your movie.

The Audio & Video
Troma's DVD of MADCOW is a bit wishy-washy with the color palette as it looks decent at times and totally washed out at others. I feel this can more likely be attributed to how the movie was photographed though. The DVD suffers from slight compression issues which doesn't make sense as it isn't a long film and there's not enough special features to really need to squeeze it down. Nevertheless there's slight blocking that is evident throughout. The picture is clean otherwise on the anamorphic widescreen (1.78:1) transfer. The English audio is weak. The mix is poorly done as audio is often muddy and low in the mix and almost totally lost at times with louder effects or soundtrack moments. The track is clean and free of damage of background noise but it's a shitty mix nonetheless. 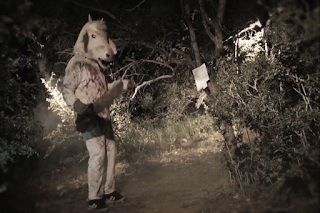 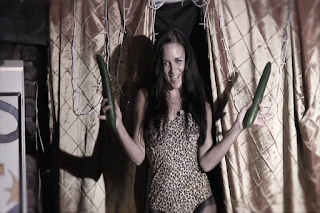 The Bottom Line
Troma by way of South Africa and it turns out to be very similar in both tone and results to many of Troma's actual productions. It has its moments but overall I'm as wishy-washy on this one as the transfer is.