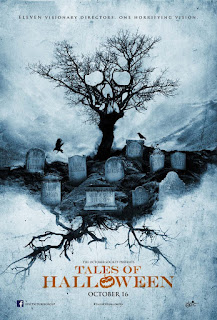 Halloween and horror movies go together hand in hand like peanut butter and jelly, tricks and treats, lamb and tuna fish. There are endless amounts of horror films that take place during the Halloween season and a few of them really manage to capture the spirit of the holiday from the childlike wonder and imagination the holiday invokes to the Mardi Gras-esque party vibe that adults love. Then there's the scary side to the holiday which TALES OF HALLOWEEN blends together perfectly with the adult and kiddie side of things.

Through its 10 part anthology TALES OF HALLOWEEN is perfect viewing for the season. Whether it's tricks or treats that you're looking for they're both here. Starting with the radio broadcast voice over from Adrienne Barbeau who has an absolutely perfect voice for such a part, to the pop-up storybook styled opening credits which are more stylish and well thought out than any opening credit sequence I've seen in recent memory, the spirit of Halloween is embodied in every second of this movie.

Of course in a movie consisting of so many different stories, which loosely intertwine here, there's going to be some winners and some losers so here's a look at each of the stories.

Sweet Tooth (Dir: Dave Parker) - This short creates a unique original urban legend and makes it fun and gory. Don't forget to leave a little something out for ol' Sweet Tooth after you're done trick or treating! This is one of my top three chapters

The Night Billy Raised Hell (Dir: Darren Lynn Bousman) - Features a lot of full on violence and a great twist. Certainly adheres to the darker side of Halloween.

Trick (Dir: Adam Gierasch) - A gory piece filled with violence as a group of teens take out some adults. The story is weak though and offers little besides the ahem... eye candy.

The Weak And The Wicked (Dir: Paul Solet) - A decent morality tale with a mean spirit. A jarring shift to Go Pro footage and an out of place metal soundtrack hold this one back though.

Grim Grinning Ghost (Dir: Axelle Carolyn) - Perhaps the thickest atmosphere of any chapter as a woman walks home alone late at night and fears a pissed off spirit is following her. Simple and effective.

Ding Dong (Dir: Lucky McKee) - My fears came true that my least favorite chapter would be from Lucky McKee. This was by far the weak point of the film for me as the story of a witch who desperately wants to take a trick-or-treater to be her own child is thin and boring along with below par effects.

This Means War (Dir: John Skipp & Andrew Kasch) - A couple of polar opposite characters carry this one as the new metalhead neighbor's loud and graphic Halloween display is at odds with the traditional decade's old display and things end in a bloody battle for neighborhood supremacy. This one is exciting from the start but is an obvious one note composition. Fun nevertheless.

Friday The 31st (Dir: Mike Mendez) - Another one in my personal top 3. Starting out with a traditional slasher film love letter to Friday the 13th, this one takes a quick turn as our slasher's victim gets some intergalactic powers and battles her attacker. The turn this one takes was unexpected, welcomed and even a bit cute. The classic body count style quickly gets an Evil Dead 2 style energy that can't be faked. Either the filmmakers believe in it or it doesn't work. It works here and I loved it.

Bad Seed (Dir: Neil Marshall) - This short is from the most experienced name in the bunch and features the most recognizable names in the cast. The story of a killer pumpkin could have easily turned into something shitty and awful but instead it is cheesy and wonderful. There's even a bit of a Halloween 3 moment at the end. I want a feature length version of this one! This is the final entry in my top 3 (don't make me choose!)

10 parts and only one real stinker? I'll take a 90% success rate with so many different voices to be heard and stories to be told. I'm writing this with a full week left in September and I have that giddy feeling in my stomach that Halloween lovers get as the leaves turn orange and fall from the trees. The season is upon us and there's one way to get in the mood this year and that is TALES OF HALLOWEEN.