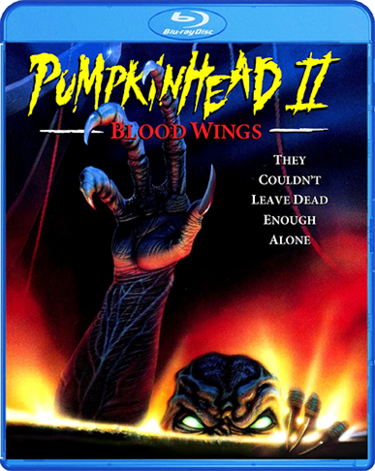 The Film
Years ago a tormented boy was murdered during a mean spirited prank by other kids. Now a group of teens has unwittingly unleashed the monster known as Pumpkinhead and the tortured boy's soul is guiding the monster's vicious killings. Pumpkinhead has to be stopped but how do you stop him without further hurting the innocent child within?

PUMPKINHEAD 2: BLOOD WINGS is simply an underrated sequel. I almost never see it discussed on horror message boards or at conventions but it is an entertaining film and is another example that the 90s weren't the terrible years, barren of any good horror movies that they sometimes get called. The thick atmosphere and mood of the original is instead replaced with a bit more excess and camp here but it doesn't hurt the film. The plot is something that has been done before but it is tried and true and it allows Pumpkinhead to be brutal, perhaps even meaner than before.

I don't think we'll ever see the day when PUMPKINHEAD 2 is considered a classic, though I'm sure it does have its fans that  would call it that, but it is a really fun horror movie. It doesn't have to be a classic, or art, or this or that. It is a campy, early 90s horror movie with some gore and good entertainment value. And it doesn't have to be anything more than that.

The Audio & Video
Scream Factory delivers a beautiful Blu-ray for this film that was mainly overlooked on DVD with only a crappy fullscreen release that looked like crap. Scream Factory has given fans the release they've wanted and deserved with an attractive 16x9 anamorphic widescreen transfer that has very good sharpness. Colors are warm and vivid without looking artificially boosted. Skin tones look natural and healthy and have good detail as do textures and surfaces. The English DTS-HD stereo audio track is a quality mix, with crystal clarity and no background noise. There's also no damage to the track and the level mix is well done. A great job overall.

The Bottom Line
PUMPKINHEAD 2 is one of the more entertaining and well made early 90s horror films. It stands up well to the Stan Winston classic and deserves a bigger audience.