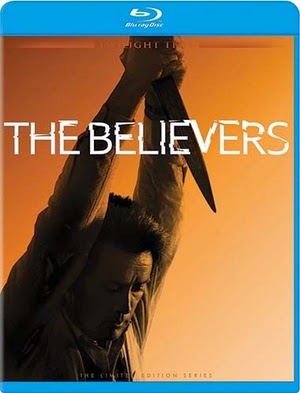 The Film
Martin Sheen plays Cal, a recently widowed police psychologist who is dealing with a series of child murders that seem to be part of a ritual being performed by a group who practices Santeria. Eventually it becomes evident that the reach of this group's evil extends to the top of corporate power and dangerously close to Cal and his family.

I really wanted to like THE BELIEVERS. I like the plot and the film has a great cast who are more than up to the challenge here. Unfortunately this film just doesn't pack the powerful punch in the writing and give us anything exciting to really grasp on to. There's no payoff for taking the journey with the film. Even the climax itself is just bland. It's a shame that the script is without that signature moment that could have really turned this film from something decent into a near classic. THE BELIEVERS isn't a bad movie but its simply average and it had all the pieces to be something bigger.

The Audio & Video
The Blu-ray from Twilight Time has a nice A/V presentation including a 16x9 anamorphic widescreen transfer that features a sharp picture with great detail level in textures and surfaces along with natural skin tones. There's no signs of DNR or edge enhancement or other digital tampering. The print is clean and we likely won't see a better looking print outside of 35mm. The 2.0 DTS-HD audio track is crystal clear with no background noise or audible hiccups. The levels are mixed perfectly.

The Extras
This limited edition (3,000 copies) Blu-ray includes a booklet, an isolated score track and a trailer

The Bottom Line
THE BELIEVERS has a good plot and good acting but strings it along for too long and doesn't reward the viewer for the time they invested into the film enough to warrant a high recommendation.

THE BELIEVERS is available HERE
Posted by Celluloid Terror (Seth Poulin) at 6:20 PM