The Doctor And The Devils (Blu-ray Review) - Scream Factory 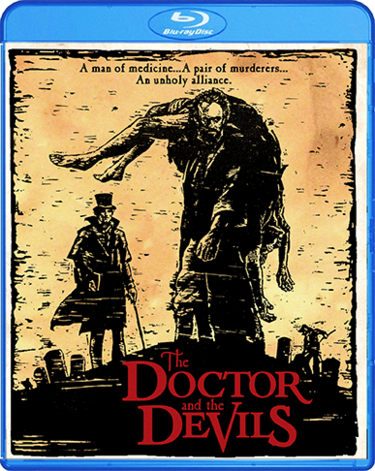 The Film
Thomas Rock is a bright young anatomy professor and doctor in 1820s England who hires a pair of grave robbers to secure more bodies for his studies as the medical board's supply isn't enough. The team of grave robbers figure out that the fresher the bodies they deliver the more money they'll earn and their game of grave robbing quickly turns to murder and the victims begin getting too close and personal for Dr. Rock.

THE DOCTOR AND THE DEVILS is a take on the Burke And Hare story which has been done plenty of times but rarely as good as it was done by director Freddie Francis here. Francis was a big player in the 60s and 70s for Hammer and his skill behind the camera is only made greater by a cast including Timothy Dalton, Julian Sands, Twiggy and Jonathan Pryce. The cast truly is stellar from top to bottom. The set pieces are big and elegant and the foggy exteriors are moody and a bit creepy.

The Audio & Video
Scream Factory's 2.35:1 anamorphic widescreen transfer is simply gorgeous. The detail level in both surfaces and textures are excellent. Skin tones are natural and healthy without looking at all waxy. The color palette in this film is a bit subdued with the foggy London setting but still they are recreated very nicely and naturally. There's no edge enhancement and black levels are deep and handled very well. The 2.0 DTS-HD master audio track is in excellent condition with a perfect mix of soundtrack and dialogue tracks. The track is crystal clear with no background noise or audible hiccups.

The Extras
Special features include an audio commentary track by film historian Steve Haberman along with interviews from Executive Producer Mel Brooks and producers Jonathan Sanger and Randy Auerbach. The theatrical trailer is also included.

The Bottom Line
THE DOCTOR AND THE DEVILS is a film that deserves a much bigger audience and reputation and hopefully this disc from Scream Factory is the open door for new fans to find it through as the quality of the disc lives up to the quality of the film itself.

THE DOCTOR AND THE DEVILS is available HERE
Posted by Celluloid Terror (Seth Poulin) at 4:00 PM